Feeling Aligned with the Universe

Posted by amidnightrider at 10:34 AM 5 comments:

Wifey wants to go shopping at her favorite place. It's The Sierra Trading Post. It's in Wyoming.

The family will be gathering in Boulder for the Thanksgiving holiday week. On the way to Sierra Trading Post, we will be stopping in my favorite Colorado city, Fort Collins. I may look into renting a bike and spending the day there while the ladies shop in Wyoming.

Posted by amidnightrider at 12:22 PM 6 comments:

The Rains are Coming.

Heavy rains are predicted for the next few days. A good time for bike maintenance. I recently ordered this , hoping that it will be an over the top attention getter. Below is the company's promo video. They say one is enough, but if my bike ends up looking like the video, I may order a second. Nothing wrong will having fun while being safer.

I'm Turning Into My Cat 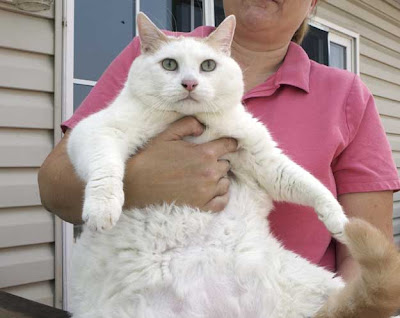 The doctor said "you need to loose weight. Can you drop twenty pounds in three months?" His concern was that the holidays would make things worse.
That's not my cat above, however, the size is pretty close.

The morning was crisp and still for the work commute this holiday. The traffic was not much lighter than normal work days. Many companies, because this is a Tuesday holiday, offered the day after Thanksgiving as a replacement. The thermometer showed a cool 37F at the start of the shortened (5 mile)commute. The sun soon began to warm things a tad which made the ride not bad at all. There are a couple of ways to add a mile or two to the commute, but still stay within the "winter" boundaries that will allow both ends of the commute to be done in daylight.

The moon is waxing and the Full Wolf Moon will be upon us Thursday. Time for a night something or other. A ride? Maybe,... how about a Letterbox hunt? Could happen. We'll work something out.
Posted by amidnightrider at 5:36 AM 4 comments:

Can You Feel It?

There is a wave of joy and a tsunami of relief being felt not only in America, but world wide. The election of Barack Obama has, in an instant, changed America from being the neighborhood thug to the big brother who always looked out for his siblings. One has to wonder if John McCain lost his chance to become president when he stuck with the GOP after thier character assassination in 2000. He was in negotiations to switch and probably would have been our 44Th president in 2004 if he made the change.

McCain still had a good chance in 2008 until the far right faction influenced his campaign and had him pandering to the small base of neo conservatives. The message of hate professed by the evangelicals and the crazies from Alaska turned any possible support from the independents and centrists of both parties against him. The claim of Obama friendships with the Reverend Wright and William Ayers, was matched by McCain's associations with James Dobson, Bob Jones University, Steve Schaffler, of the Iowa Christian alliance, and George Bush, and were just too much baggage for McCain to carry.

Anti abortion, anti liberal, anti gay, anti union, anti environment, anti health care, showed the direction a Republican administration would lead America. The party of exclusion would continue to travel the road of exclusion, division and bullying. Alienating our allies in the name of national security, and pitting Americans against each other in the name of god and the NRA.

The straw that broke the back of the McCain campaign was the choice of Sarah Palin for Vice President. That opened they eyes of Americans to the decisions and choices McCain would take as President. It also told us that the motto "Country First" were empty words and the continuation of "politics of fear first" would be the mantra of his administration. The planting of Joe the plumber soon became obvious to even the most casual observer as another ploy of a campaign that had no direction.

America had no choice except to look for an alternative. Along came a man who would put America ahead of politics. An honorable politician who promised us change and told us how he would accomplish the changes. A man who would make the right choices in not only his Vice President, but his cabinet, administration and government. He will end the policy of appointing judges who make decisions bases solely on politics, and would instead base them on the law. Moderates, who will do the right thing will replace the theocratic people in government.

Obama is the change America has been pining to see since the disastrous Reagan administration, whose policies are still holding America down. The twelve years of republican congressional rule compounded by the Bush administration's policies, supreme court appointees, and short reign of the neo conservative Senate, combine to make the task of the newly elected government daunting to say the least.

It will take some time, and it will be painfull occasionally. But history tells us and future history will confirm, that American is a much better country when we follow the liberal values of inclusion, separation of church and state, and being the country to look up to not fear.

Americans have laid the foundation of the road to recovery and return to greatness through change. There will be those within who will try to stop her out of spite and fear. President Obama and the Democratic government have an opportunity to smooth out the bumps and make us again proud to be Americans, where ever we travel.

People are now finding themselves sitting in traffic, at thier desks or just hanging around. All of a sudden a wave of joy overcomes them and they start pumping thier arms shaking thier heads and stomping their feet shouting, "yes, yes, yessssss". Change is here. Can you feel it?
Posted by amidnightrider at 5:40 AM 5 comments:


Posted by amidnightrider at 8:38 PM No comments: