Hike the Blue Hills of Boston 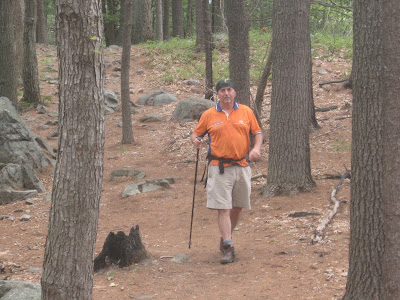 Wifey is away in Utah and Nevada doing lots of hiking. They had to cancel the Grand Canyon Hike because of the flooding. All the talk about that put a bug into my head and being on vacation at home seemed like a good time to do one myself.

When we arrived at the Blue Hills Reservation the first noticeable thing was that Logan Airport was bringing in the planes right over the hills for final approach. As we climbed we got closer and closer to the aircraft and were sure the pilots and any passengers looking our way could see us waiving our arms in greeting.
Plane on final approach to Boston 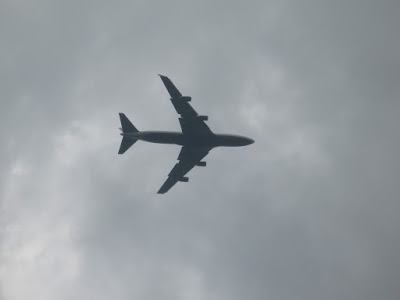 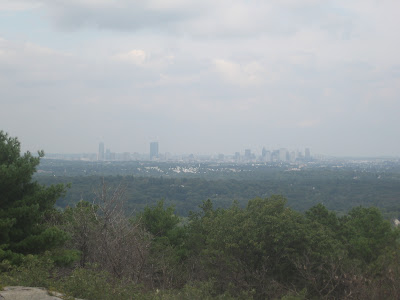 The hike can get difficult at times but the views of Boston and the surrounding area is well worth the work.
Town of Canton Ma. 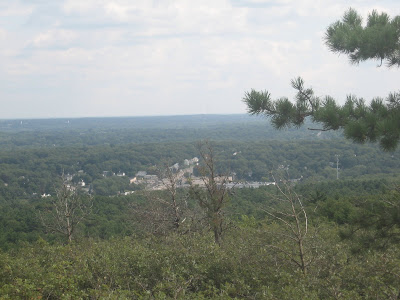 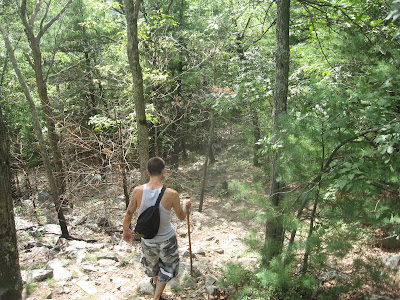 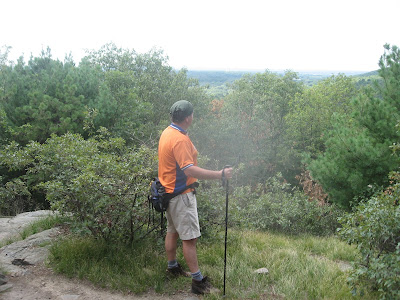 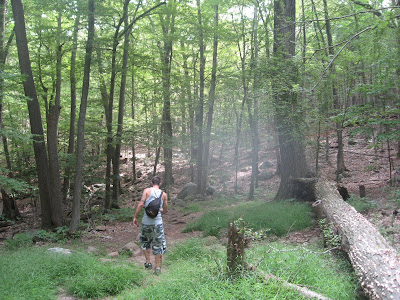 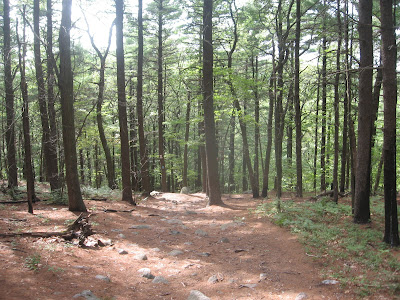 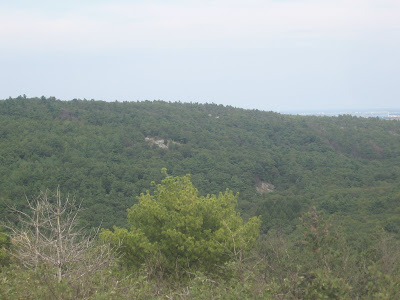 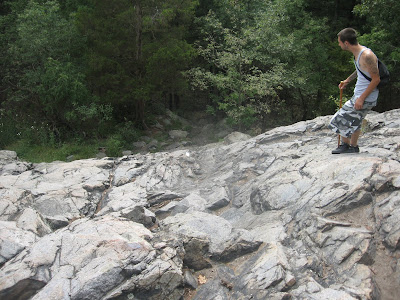 We estimated that we did around 8 miles and hiked for 5 hours. We both felt pretty good till the last forty minutes. We had used up all of our water and still had forty minutes of moderate hiking to do. Not a big deal but the water that was stored in the car sure hit the spot when we finally got to it.
Going up 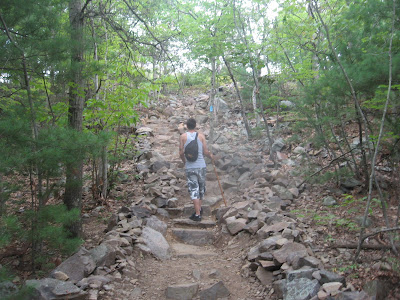 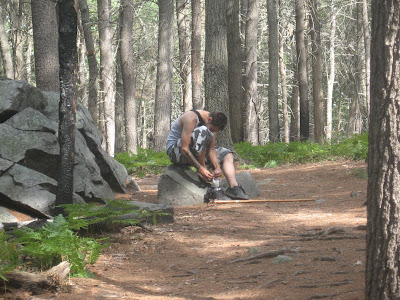 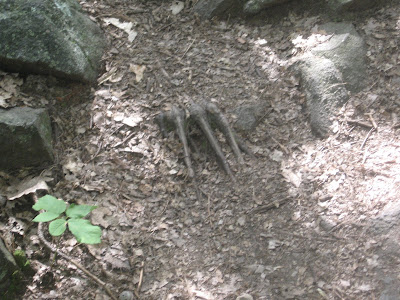 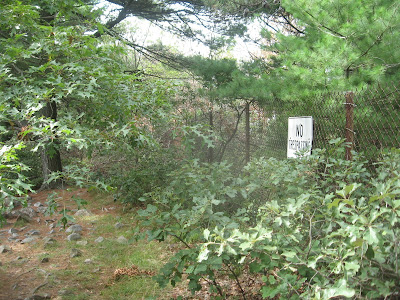 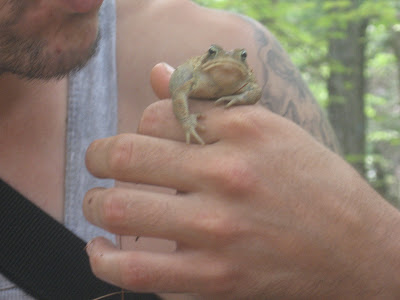 Being shy and all, I try to stay under the radar. Well most of you know that. But it seemed that everywhere we went last night, a lot of people knew me. Go figure.

I got a call from Johnny F who rode with us in NYC, he wanted to go out for a beer and some tapas.

"Sure, I'll ride my bike and meet you there". "Ya know, that's a good idea", says Johnny. "I'll drive to your house and we'll ride to Elizabeths Bistro together"

We had some lobstah and chowdah, a couple of glasses of sweet Riesling and decided to head into New Bedford to Antonios, a popular Portuguese place. Johnny wanted to ride back to my house and drive there.

"I don't know, it's dark and kinda dangerous"

We got there with no problem after I led us on a quiet safe route . Some bike path, some sidwalk (over the bridge) and the rest on industrial roads that had no traffic at all.

After an hour it was time to go home. Johnny wanted to go back to Fairhaven and maybe stop at "The Bridge St. Station". Fine is kind with me.

After the Station it was Pumpernickles, then "The Capeway", "Ebb Tide" "The Tavern on the Neck". and finally home. Sort of. Remember wifey is away.

This was the new take on the Pub Crawl. But we did it on bikes. Last March, Brandon and I did a similar ride and Johnny ,who was at Antonios, took our bikes away from us, put them in the back of his truck and drove us home. (It was Absolute Vodka promotion night). Well Johnny is one of us now.

Ride on.
Posted by amidnightrider at 2:56 PM 2 comments:

Ideal for three-season backpacking, our Camp Dome 2 is lightweight, simple to pitch and now has two doors--all at a sweet price!

What Is Your Gear Style: Comfort Driven

I used this tent while bike touring the Erie Canal. It rained 5 of the 7 days and the tent did it's job.

Set up is around two minutes (if that) and even in the dark there was nothing to it. All my gear fit inside and there was still room for me to be comfortable.

I would highly recommend this tent because of it's ease of set up, it's light weight and it's very inexpensive. A great buy on it's merits and more so because of the price.

Full Sturgeon Moon and Lots to do.

Full Sturgeon Moon rising
Skipping fitness class to work around the house just didn't feel right. Kind of like a cheating feeling. Cutting the grass, and taking the dogs for an hour long walk, could not shake it. Maybe a bike ride. Yea, that's the ticket.

I needed to do some grocery shopping and loaded a set of small panniers on the winter commuter hog. (Marin Belvedere). Even though it was my first time doing some major grocery shopping using a bike, it felt natural. I guess after a while, the bike thing just "is". By the time I got back home, I felt much more relaxed and forgot about that feeling of doom.

----The moon is almost full. Saturday is the Full Sturgeon Moon and the prediction is for a decent evening for bike riding. FBC Fairhaven, and affiliate of FBC St. Louis and FBC Spokane, will be joining our brethren of those cities for our 6th Full Moon Fiasco. Fairhaven's numbers are still low in comparison due to the lack of getting the word out. We'll see what we can do about that.

Posted by amidnightrider at 5:58 AM No comments: There was every intention to commute by bike today, but things piled up enough to force a sleep in. I usually awake every day just before 5AM, and make the decision to ride or roll over.

Just before turning in around 10ish, I switched on PBS to find Chris Botti in concert. Playing repertoire mostly culled from his two hit albums, "When I Fall In Love" and "To Love Again," Chris was joined onstage by some of the world's most accomplished singers and musicians, Sting, Jill Scott, Paula Cole, Burt Bacharach. That kept me up till 11, and I figured that losing a little sleep would not be much of a setback. 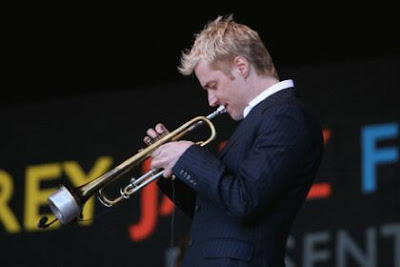 Around midnight the thunder storms started rolling through. More often than not, they last a half hour, more or less. At 4AM they were still rumbling through the area. The dogs had taken shelter in the basement with the lovely wife.

Needless to say it was a resless nights sleep and the first look at the clock showed the time to be 6:15. ("I'm late, I'm late, for a very important date"). I need to leave the house by 6:30 to get to work on time and some scrambling got me out of the door just a little late.

Again no riding, but kick boxing with Mary Beth tonight will more than make up for the aerobic part, but the lack of bike miles is beginning to get to me. Tomorrow for sure. Maybe.
Posted by amidnightrider at 4:57 AM No comments:

After fitness class at the "Y" I noticed the crowds and music up the street. Some kind of festival no doubt. I am a big fan of the different events and festivals in New Bedford. This was "classic car" night.

The first thing I though was Havana. I think I'm in Havana. Lots of 50's Chevys and Fords, a single 1920's vintage car and even a "Pacer". Oh for a camera.

The second was the "abundances and lack of's" An over abundance of bellies and a sever shortage of teeth. These things sure do draw a different crowd. The more I walked around, the more I pined for my camera. For instance, I saw a couple and guessed they were late 50ish. Both in dungaree pants and shirts. The man was short, fluffy and sported a jet black Mohawk. As I passed them I noticed that the man was actually a woman. I can't help but wonder what the heck she was thinking with her style. Did she see it on a teenager who wore the look well and though she coule pull it off? Did she lose a bet? Does she have a mirror?


While munching on a stuffed quohaug I heard "hey coach". John, who I coached in high school around 1980 was there with his posse. (his kids).

"You here for the car show"

"No, I just finished kick boxing class and took a walk up here".

"Mary Beths class right?" I gave that knowing smile and nodded in the affirmative.

He asked if I was there for kick boxing or because Mary Beth is the instructor?

He then asked "If she was teaching a different course, which one would I attend."

The answer is obvious to even the most casual observer who has seen her in "uniform".

Of course the goddess Gina, being in the class also adds a bit of motivation. Posted by amidnightrider at 5:12 AM 3 comments:

We got caught in the rain a lot during our Erie Canal tour. Monday on the ride home from work the sky got noticeably dark and the sprinkles began while I was riding through the abandoned State School Property. I though about going into one of the buildings to see what would happen with the obviously approaching storm.

As I got into the main road the wind began whipping. "Not good, this is definitly not good", was my immediate thought. Then I began to watch the sheet of rain approach from my right. I had to take shelter in a cluster of trees. Naturally I got wet, but I was not really taking cover from the storm but from the traffic, who would have a difficult time noticing me on the road.

As I was hunkered, two kids on their dirt bikes passed by, soaked to the bone and screaming in delight. "Yeeeeehaaa". They were giddy with distress.

I resumed the commute when the rain lightened up and was pretty uncomfortable. But the storm also made me think of the times we got caught during our adventure, and it brought on a smile.

After having been off the bike since last Thursday, I got up early to commute. No
AHHHHH of the Sirens. It was like I never stopped.

Our bike tour seems so long ago and so far away. We actually it was far away, but it seems like another lifetime.

The contract negotiations at work are comming along fine. It looks as if everyone will be satisfied. We will keep our medical benefits, get a substantial raise and our retirement is safe. The only sticking point left is for the company to allow the organizing of the wireless and MCI parts of the business. They have both voted to unionize but have been blocked so far. Those workers are really pushing so they can enjoy the benefits of being a union member, with better pay, benefits and having everything in writing concerning their job. Just as companies do when they sign contracts with customers and vendors.
Posted by amidnightrider at 4:42 AM 12 comments: