Ended the year with a modest 3200 miles on four different bikes. There is a place to easily log bike miles HERE

The dogs had a great time on the MUP because of the recent snow. 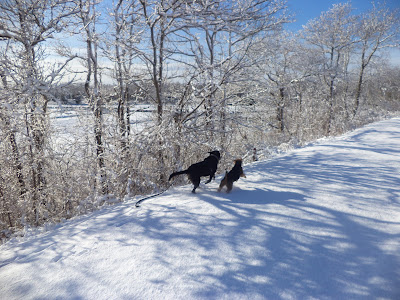 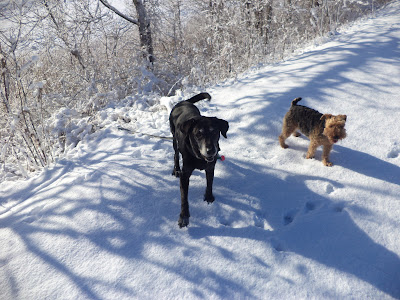 The turbines looked majestic in the ice and snow. 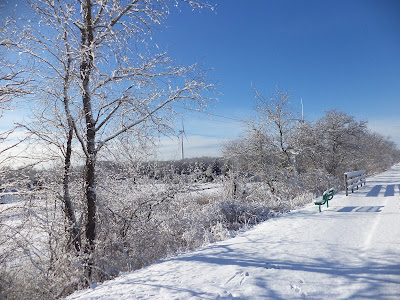 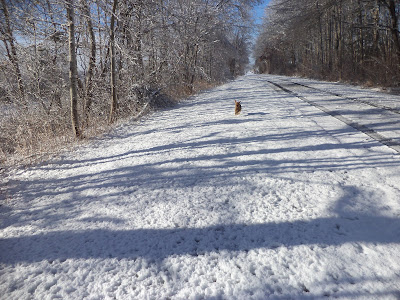 Posted by amidnightrider at 4:50 PM No comments: 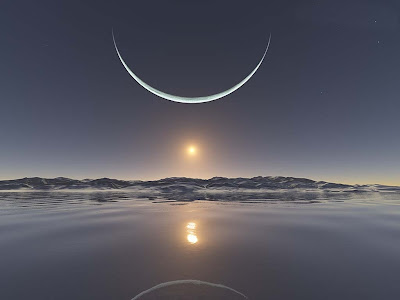 In the northern latitudes, midwinter's day has been an important time for celebration throughout the ages. On this shortest day of the year, the sun is at its lowest and weakest, a pivot point from which the light will grow stronger and brighter. This is the turning point of the year. The romans called it Dies Natalis Invicti Solis, the Birthday of the Unconquered Sun.

The Roman midwinter holiday  was both a gigantic fair and a festival of the home. Riotous merry-making took place, and the halls of houses were decked with boughs of laurel and evergreen trees. Lamps were kept burning to ward off the spirits of darkness. Schools were closed, the army rested, and no criminals were executed. Friends visited one another, bringing good-luck gifts of fruit, cakes, candles, dolls, jewellery, and incense. Temples were decorated with evergreens symbolizing life's continuity, and processions of people with masked or blackened faces and fantastic hats danced through the streets. 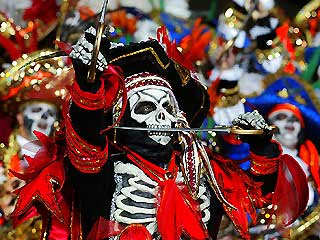 The custom of mummers visiting their neighbours in costume, which is still alive in Newfoundland, is descended from these masked processions.

By 1100 Christmas was the peak celebration of the year for all of Europe. During the 16th century, under the influence of the Reformation, many of the old customs were suppressed and the Church forbade processions, colourful ceremonies, and plays and declared December 25th the birthday of Christ. Mistletoe, which was sacred because it mysteriously grew on the most sacred tree, the oak, was ceremoniously cut and a spray given to each family, to be hung in the doorways as good luck. The celtic Druids also regarded mistletoe as sacred. Druid priests cut it from the tree on which it grew with a golden sickle and handed it to the people, calling it All-Heal. To hang it over a doorway or in a room was to offer goodwill to visitors. Kissing under the mistletoe was a pledge of friendship. Mistletoe is still forbidden in most Christian churches because of its Pagan associations, but it has continued to have a special place in home celebrations. Happy Solstace everyone.  Enjoy the holidays.  All of them.

Posted by amidnightrider at 5:12 AM 4 comments:

The End of Commuting is Near. 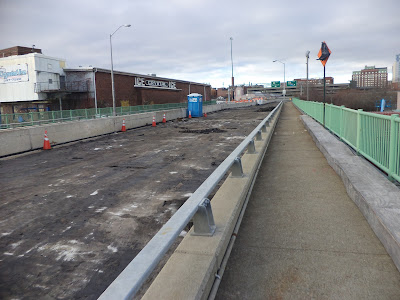 Yesterday was windy as all get out.  So much so that I checked to see if one of my tires was rubbing on the brake because it was such a slog riding.  With a single speed there is no down shifting and that's something that takes a bit of getting used to.   It was the first day in a while without rain and it was a no brainer to ride to work, wind and all.

There is still lots of construction downtown New Bedford, MA but as seen below some of the new boulevard has been completed.   The bridge (above) spanning the New Bedford harbor still has a year before completion.

Only two more days of work because on Christmas eve all the Salvation Army bell ringers and drivers (me), get pink slips.   It may be difficult to get on the bike in the morning with no place to go. 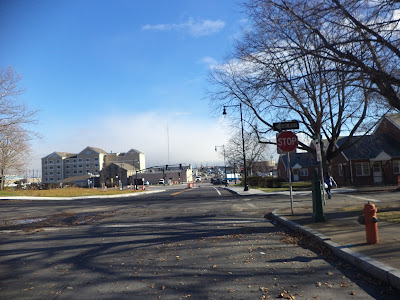 Posted by amidnightrider at 12:35 PM No comments:

The Meeting Went Well. The Ride Home, Not So Much.

It was a beautiful evening for a night ride into the city to meet up with the New Bedford Bike committee.  I was pleasantly surprised that the whole group was well under the age of 60 and none had the white beard and body of the typical "bent" rider.

My original intentions was simply to meet this group, take a couple of photos for this blog and ride home to watch the meteor shower.   They were a friendly bunch and when I glanced over to my right I saw a martini glass.   Like the ringing of a bell, I began to salivate and next thing I knew a Beefeater Martini with olives, straight up was sitting in front of me.  I don't even remembering ordering it.  Nor do I remember ordering those glasses of Peroni.

The ride home got really neat when I hit the dark sections of the Phoenix Bike Path.  The moonless sky put on a show of meteors that had me ooohing and ahhhing.  I saw a couple of dozen of them in the short ride home.  I did have trouble holding a line because of the constant star gazing and the earlier refreshments.

I also got a kick out of being told that I could be charged with biking under the influence in Massachusetts.  This information was given while I was half way through my third drink.  Things worked out pretty well in the end because I awoke this morning at home, and as far as I know I got here on my own. 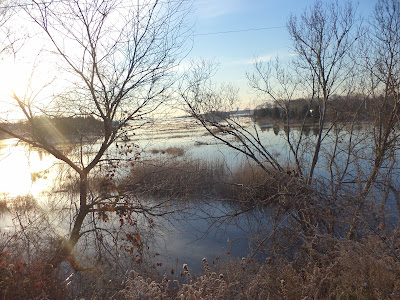 The temperature was 27F when I left the house for the daily commute.  The salt marshes were at  no moon high tide which if you don't already know is higher than the full moon.   Actually no moon is a full moon also, just fully dark, as opposed to fully visible.


The frost was till clinging to the bare branches as I coasted along the MUP and the daily walkers were scarce this morning.  Surely they simply delayed their start waiting for the warmth to take hold. 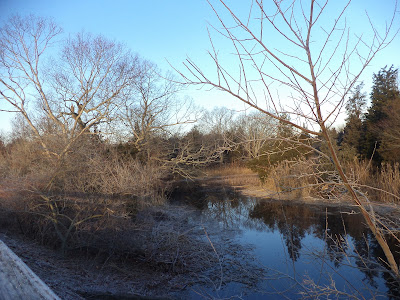 Posted by amidnightrider at 9:04 AM 4 comments: 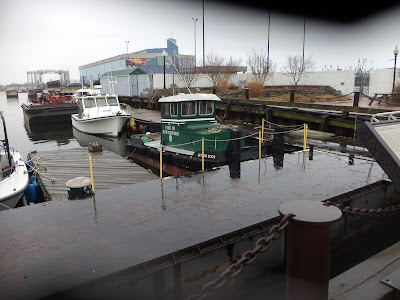 
There is a group of walkers who stroll the Fairhaven Bike Path in Massachusetts daily.  They are now followers of this blog and I bid them welcome.

It was a cool morning but as usual proper dress nullified that.   Like skiiers, walkers and those who work outside,  it's all in the clothing. 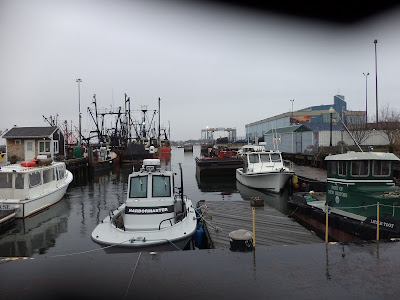 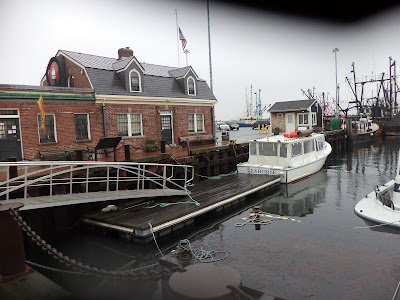 Another biker was struck and killed in Boston on Friday.  This is a notoriously dangerous intersection where there have been many close calls.  Read more

The fifth bike death in Boston this year.  A 23 year old college student. 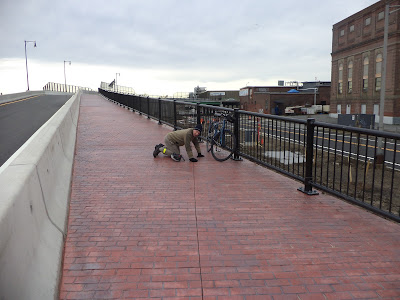 Dave giving the surface a thorough inspection.
As always, click any photo for big.  Click again for bigger.

Dave wanted to take a ride and check out the new ramp and the progress of the redesign of the downtown roadway.   He suggested that the walk/bike way was not brick but actually pressed concrete.  A close look confirmed his observation. 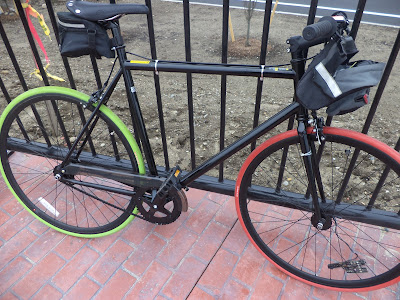 Scofflaw riding on the closed ramp. 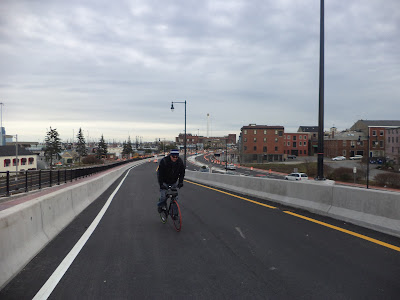 We took a ride around downtown New Bedford before returning to the on ramp and the bridge crossing. I suggested that we ride up not on the bike section but the road.  Since it was not yet open to traffic that would not be a problem.   At the top I also suggested that the new ramp needed to be  christened.   Dave said "we don't have champagne to do that".     I mentioned I drank a couple of gin martinis last night and that would suffice.

The ramp has been properly christened and is now ready for the public.


Meanwhile back at the house Brandon was being the good son helping Ma.   Putting up fish and washing her car.

What a good son helping ma with the fish and all. 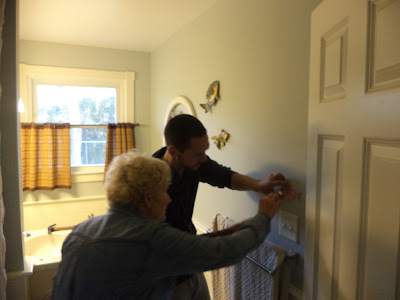 Then he washed her car saying "really, you two are going riding without me?"
Oh how the roles have reversed. 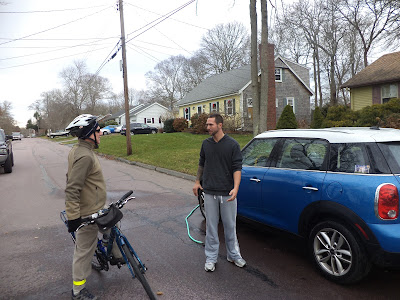 Posted by amidnightrider at 1:12 PM No comments: 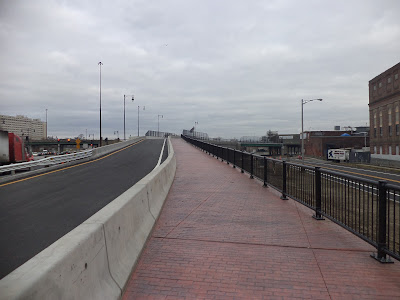 The new on ramp to the New Bedford/Fairhaven bridge is complete but not yet open to traffic.  This merges nicely with the sidewalk crossing the bridge and eliminates the need to portage bike up the steep flight of stairs.

I spoke with an engineer at the top of the ramp before riding down and he assured me that I was the first bike to use the new bridge.


A picture for posterity. 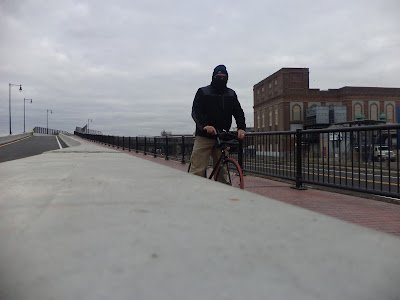 The bottom is not quite finished.  Also the RR tracks are being replaced in anticipation of the new commuter rail to Boston.

Not quite done at the bottom of the MUP 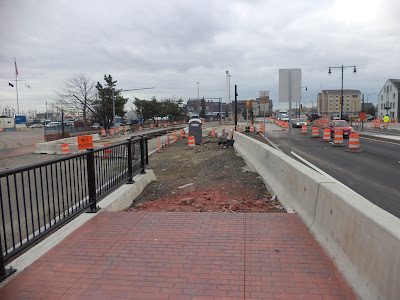 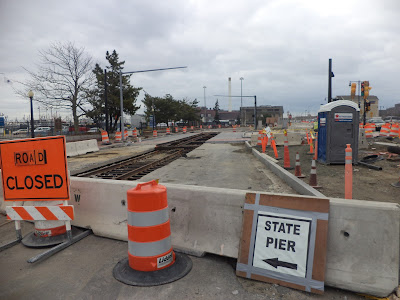 Lying stone on the new tracks. 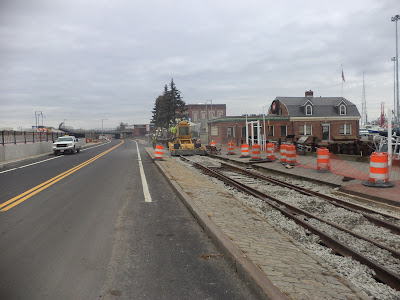 Posted by amidnightrider at 8:42 AM 2 comments: 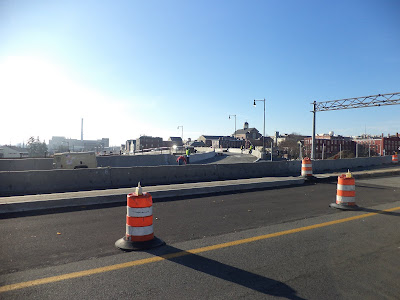 The new ramp from the reconstructed highway that once cut off the city from the waterfront will open to traffic in the morning.  I want to be one of the first, if not the first bike to use this newly designed roadway.  It's no longer a highway but now a traffic calming boulevard.  In the past, some cars would hit speeds in excess of 70 MPH on the two mile drive from downtown to the south end of the city.  Now there is single lane traffic with eight signal lights to keep things running smooth and slow.

The entrance to the bridge crossing the harbor now has a bike/walkway. In the past we had to portage a stairway to gain access to the bridge.  Carrying the bike is not bad especially the new single speed.  Speaking of which, the high school soccer team gave me a gift certificate to a local bike shop. I used that to get two new tires for the bike.  The reviews from the local riders is positive so far. 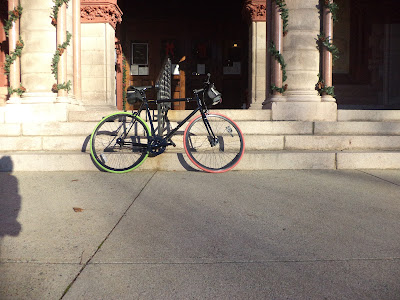 Posted by amidnightrider at 3:31 PM No comments:

Bike Chase Circa 1971 in San Francisco, McMillan and Wife

Posted by amidnightrider at 4:51 PM 2 comments:


There is something about a cool foggy morning on the coast.  I left a little early for for my daily commute into the city.  No reason, I was just up before usual.  The construction workers were just setting up the barriers. The traffic was light, and I had plenty of time to lollygag before the next schedule opening of the bridge crossing the harbor.

Cabin Cruise moored in the fog. 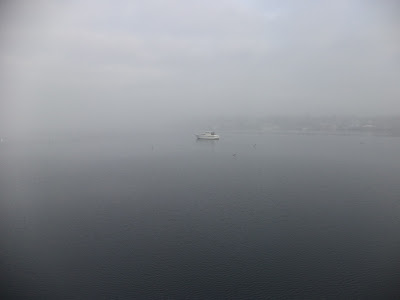 The extra time allowed for a side trip up Johnny Cake Hill in the National Historic Whaling Park in New Bedford, MA. 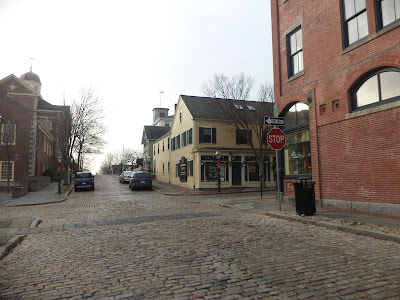 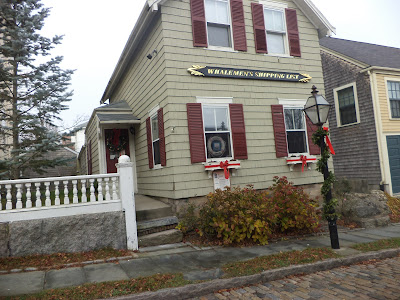 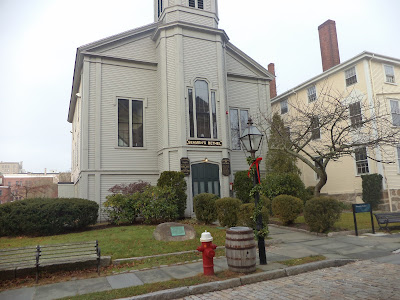