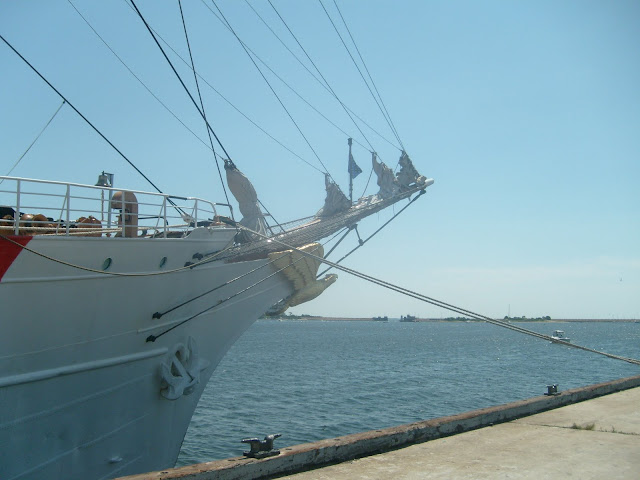 The Coast Guard Tall Ship Eagle docked in New Bedford on Friday.  Our rowing club will be hosting much of the crew at a cookout tomorrow. We figure around 75 of them will show.

I was surprised at how young the crew was.  I thought that it was academy grads or seniors who manned the ship but after seeing them today I'm now thinking sophomores.

The bridge spanning the Acushnet River is under repair for a few weeks.  Those of us on bikes have two full lanes to ourselves.  During heavy traffic when the cars are all backed up a few of us have been meandering across the bridge weaving around our two full lanes.


Everything to the right of the yellow cones is traffic free. 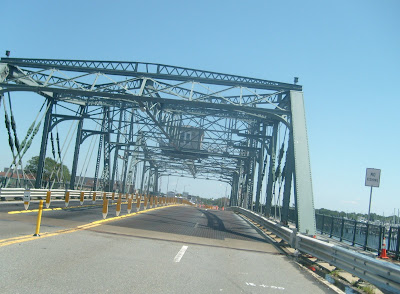 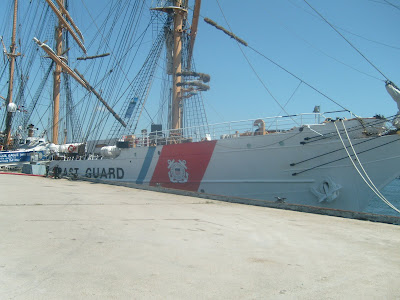 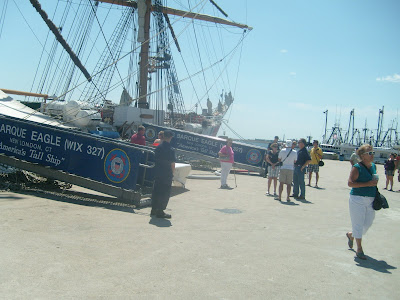 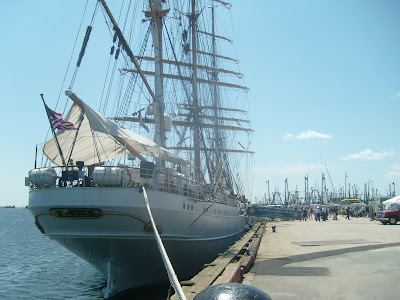 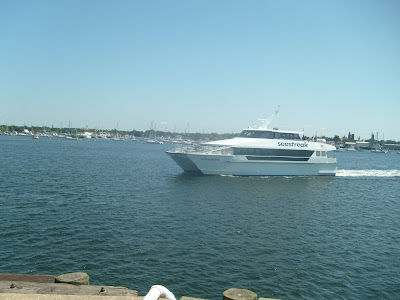 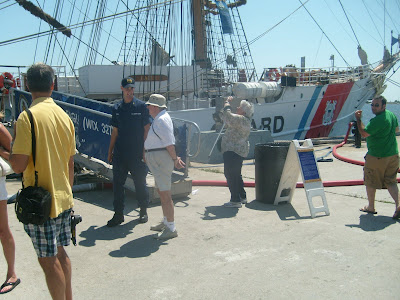 Posted by amidnightrider at 7:21 PM 3 comments: Links to this post 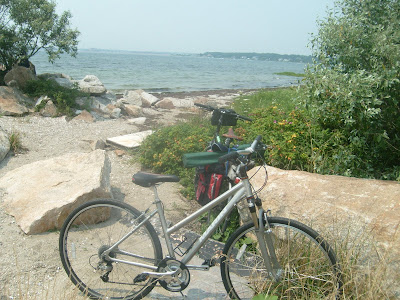 Biking to the beach.  The red back has towels, books, sun lotion the green bag is a beach chair.
Boston Magazine recently ran a special on the SouthCoast of Massachusetts.  Buzzards Bay was often mentioned for sailing, fishing, swimming among other things.  It mentions that the Bay is fed by the Gulf Stream which keeps us from the freezing cold and snows common to areas away from the Bay.  The beaches are numerous and have been a destination for decades. This time of year, the Gulf Stream warms Buzzard Bay to a comfortable 75F.  Very nice for a dip or a swim, which is what we have been doing daily for the past couple of weeks.

Fort Phoenix was our destination for the past few summers, but budget cuts have forced area town to now charge for beach access at a cost of $15/car.  Naturally, walk on(s) and bikes are free. However, the towns have also banned parking on the streets near the beach with a fine of $35 if ticketed.  Fort Phoenix is the only free beach that has ample free parking and access which is good for most but it now attracts the shit bums too.  Those are the ones who rifle through bike bags,  break into cars and steal anything that is left unattended, including blankets, chairs, coolers or whatever.

Because of biking, wifey and I rediscovered this little secluded beach in town that I had know about forever but because the others were so popular and nice, we never thought to swim there.   That's all changed, it's a mile from our home and still a hidden gem. 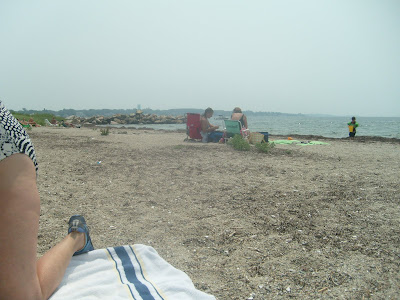 Posted by amidnightrider at 2:24 PM No comments: Links to this post 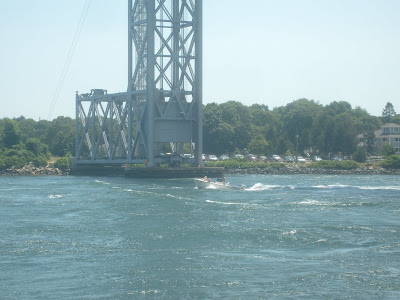 
I was talked into participating in a tennis tournament today and grudgingly accepted without knowing the competition.  Two things came together to get me to take a bike ride.  The competition was way over my level and there was an odd man out situation.  I jumped at withdrawing, called Dave and we did a 50 mile bike to the Cape Cod Canal. 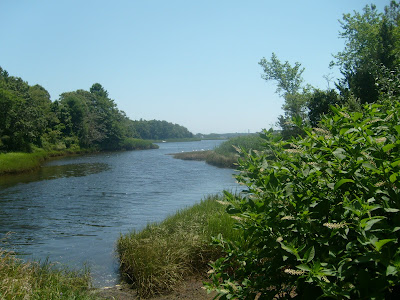 Since this has been a regular route of mine for three years, I got a chance to show Dave, a first year roadie some of the out of the way places that one doesn't see from the expressway.
Onset Beach in MA. 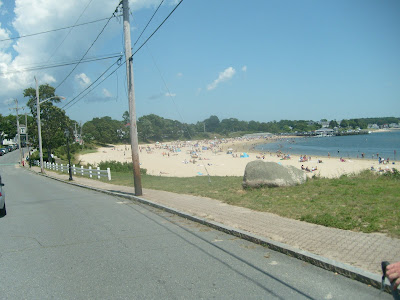 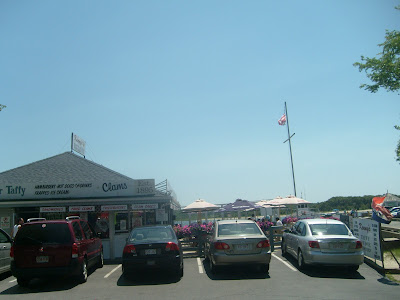 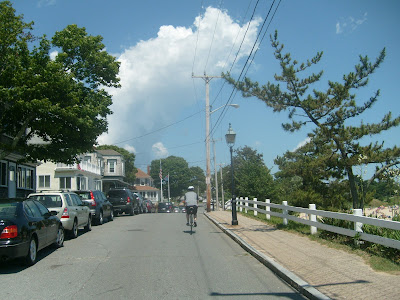 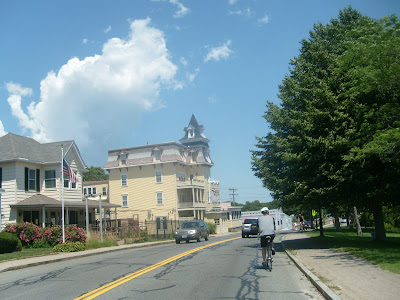 From Onset we had to ride on busy US Rt. 6 for about a quarter mile to get to the entrance of the canal bike path. The path was busy but we only road a half mile before exiting back on the main road.  Once there I showed Dave the hidden access road that led to the bike, pedestrian walkway over the Bourne Bride..  The traffic was backed up on RT25 as far as the eye could see with vacationers making their way to "The Cape".
Traffic backed up getting onto the Bourne Bridge crossing the Cape Cod Canal 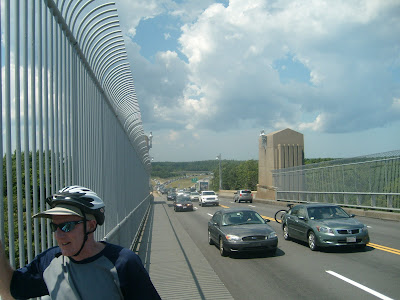 Pleasure boats riding with the current in the Canal 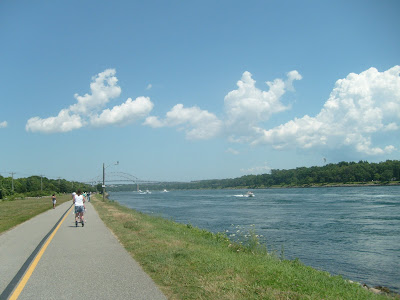 The ride to Wareham and the Canal never gets dull.  Every time I ride it I see something different, explore side roads and paths and strike up conversations searching for out of the way nuggets that the locals sometimes share.
Posted by amidnightrider at 7:02 PM 4 comments: Links to this post 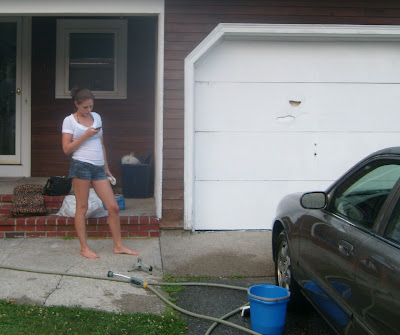 Last time here boyfriend threw the bucket of soapy water on her.  He wasn't around today. Dam.

All the riding has been short trips around town.  The coffee shop, the market and daily rides to the beach.  Ah the life of a retiree.  One of the stops is to get fresh eggs.  There is a house behind a large property filled with abandoned greenhouses.   The place suffered it's demise by KMart, Sears and supermarkets selling gardening supplies.  The house has a small pen with goats, and chickens.   Emily's eggs are a self service place and they sell for $2 a dozen.  A really good deal for fresh eggs daily. 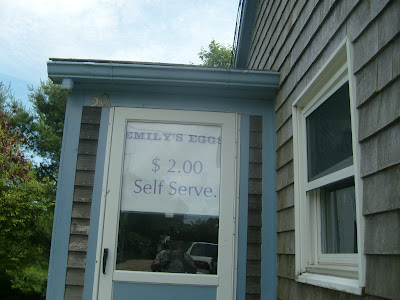 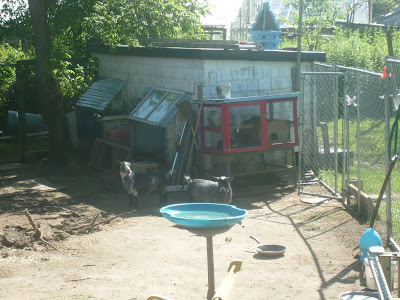 Posted by amidnightrider at 5:23 PM 3 comments: Links to this post