My neighbor had a couple of bikes in storage and asked me to take a look to see if I could do something with them. It took less than a minute to decide that they were both junk. I stripped one down to the frame and am looking into making a single speed out of it. The first stop is to bring the rear wheel to my LBS and see if it can be cleaned up and converted.

I need to learn how to do everything and am going to ask the LBS to take me in as a paying student and rebuild the bike at the shop. I know bikes are a simple machine and once someone shows me how the thing is put together, I'll be fine and do the second one on my own. In the mean time I just may have a decent single speed for putzing around.
Posted by amidnightrider at 6:14 AM 5 comments:

Twenty seven more Fridays and work will no longer get in the way of bike riding, or anything else.
Posted by amidnightrider at 7:43 AM 3 comments:

Riding With The Stoners 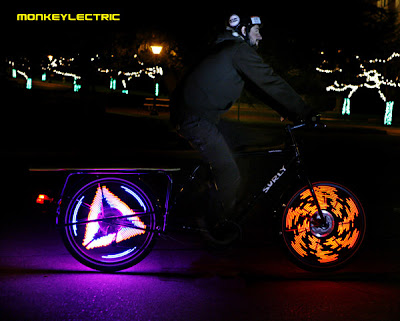 Last night I got everything ready to commute this morning. A couple of the neighborhood 20 somethings saw my garage open and approached with an offer to go riding. It was eight pm and dark as all get out. Naturally, I agreed.

On this night I chose the touring bike, the Novara Randonee. Naturally it's the one with the Monkeylectric lights.

As soon as we left I noticed I had to keep a good eye on one of our group. He was all over the MUP and I really thought he was going to ride off the path a few times. A couple of miles into the ride we stopped and they lit up a joint. "Home grown stuff", said Jason. "Want some?"

I only said that because I don't know if I would be able to ride after. I'm thinking it would be like eating McDonnald's food and make me too sluggish. Steve's riding became more eratic as expected I guess.


We did a little under 20 miles and a lot of it was hammering. There is something about riding at night that make some of us want to ride faster, and we also rode a lot longer and further than we intended, pulling back up to my garage around 10ish.

It was after 11pm when I finally got settled and consequently today's commute was scratched. Tonight however is expected to be a great riding night. We may just do it again. A little less under the influence I hope.
Posted by amidnightrider at 5:48 AM 1 comment:

Saturday's bike ride caused a bit of heat over diner plans. Our companions like to eat early, like 5:30ish. I like to go late, more like 7:30ish. I figure on Saturday I can accomodate without a problem. This week however, Brandon and I got a late start and I was at the furthest point on the ride from home when wifey called.

"Near Glen's house in Dartmouth". I responded.

My computer showed 3:30, still on Daylight Savings Time. It also showed that we were 16 miles from home. I told my riding partner we had to make like the wind and hammer home. We blasted through a few stop signs and traffic lights to pick up some time. We took a couple of shortcuts through the side streets of New Bedford and at one point hooked a left at a red light which really pissed off some kids in an old Oldsmobile. A loud unfriendly blare of the horn, which prompted a friendly wave, smile and thanks in return. That got me a "you fuck" from the passenger, to which my partner yelled, "suck my dick". Ahhhh, city riding.

We made real good time and as we approached the bridge over the harbor the light had changed and the gates closed. We sped up to them, scooted under the gate, scurried across the bride and under the gates on the other side. The bridge tender never had a chance. he he. 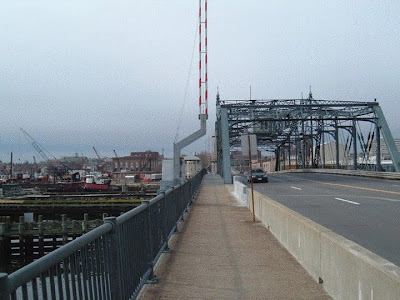 When I got to the house wifey was downstairs doing something or other. I did a quick change and and at 5:10, was standing at the door dressed for dinner when she came upstairs.

"You ready", I inquired

"I already changed the reservations till 6".


The up side of this is that I don't care for the originaly restaurant and the change in time also forced us to change restaurants. It also brought us to the center of New Bedford where the "half way to St. Patrick's Day festival" was going on.

We ended up with a 25 mile ride on Saturday. Sunday we saddled up again for a 17 mile spin, but nothing nearly as exciting happened.
Posted by amidnightrider at 5:59 AM 1 comment:

Wifey is Still Away 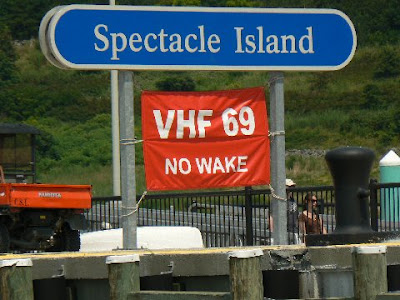 Wifey is still hiking in Montana and the forcast called for a beautiful day in Boston. Brandon and I both had the day off from work, and decided it's a great day for a hike. We talked about driving to the Blue Hills again, but then the idea of visiting another of the Boston Harbor Islands called us.

As we apprached the ticket kiosk, I noticed everyone was standing in line in front of one window. Another was open and I approached and asked if he sold tickets to the harbor island. "Sure do" he said. Next thing I know everyone who was at the other window was behind me. That one closed and sent all the people in line to my window. I quietly made my purchase and slinked away toward the ferry. Smirking of course. Naturally, every one of those who I pissed off boarded the same ferry.
"There he is Merle. That's the guy who cut in line. Go say something to him". Said Dot.

Without doing much research, we disembarked on Spectacle Island. It boasted a five miles of hiking trails. What is not so well know is that it's a barren island, and if your not a really devouted nature lover.....it sucks. During the peak season, you could reboard the boat and go to another island. This time of year however, the only choice is to return to Boston. We made that decision.
Longing to get outa here. 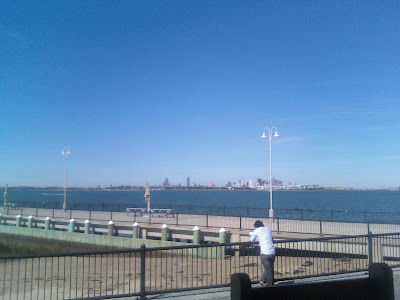 "Lets go look at a cemetary" I finally suggested

We walk to the Grannary Cemetary and burial grounds. Founded in 1660, the Granary is the third oldest burying ground in Boston proper. In 1737, when grain was stored where the present Park Street Church stands, the burying ground was renamed the Granary. Along with Massachussetts Governors, Clergymen, and Mayors, three signers of the Declaration of Independence, Samuel Adams, John Hancock, and Robert Treat Paine, are buried here. There are a few others like Paul Revere and his sidekick Robert Newman (the lamp guy). 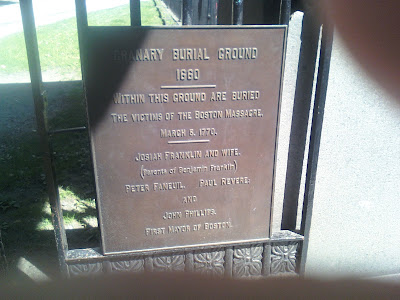 We walked around the places that very few tourist get to see. This is where the real flavor of any place usually live. Where the locals go like the Barking Crab (above), that has it's own docking spots for boats.


Boston from across the harbor


It's nice to be so close to the city and be able take a quick train ride and spend the day.
Posted by amidnightrider at 6:05 PM 1 comment: