Haven't been doing much riding lately but walking every day. Two or three sessions totaling around 10 miles. The industrial park is loaded with trucks from all over the country and Canada. It's neat to see where they are from. There is a bike blogging friend who lived in this town I think.

Then again I could be wrong. Noah?
Posted by amidnightrider at 12:16 PM No comments: Links to this post

Commuting in the Dark

I met a fellow commuter a couple of weeks ago. He lives a little over a mile from my winter parking spot. Since there is a super market there I decided to ride the extra mile and do the home bound commute with him.

I still have to ride in alone in the morining and today it was very dark, but nice. The dark actually helps my lights be more noticeable and I still get "what the" looks from my MonkeyLectric light. It's a really unusual light and very cool, if I say so myself.

Posted by amidnightrider at 7:53 AM 2 comments: Links to this post 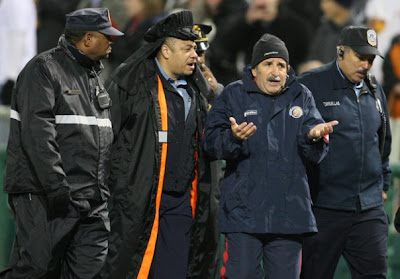 The two goal lead was here a minute ago. I don't know where it went.

We had a great time in Washington, topped off with a really fantastic match. The us came from two down to tie Costa Rica in extra time and win the group outright edging rival Mexico 20-19 on points.

While doing the sightseeing thing during the day we were studying a map to try and find Pennsylvania Avenue because we wanted to see the White House. Personally, I wanted to see what kind of protests were going on, because those can get interesting. We got frustrated looking at the map which was in a bus stop kiosk and were about to say screw it. That's when I looked up at the street sign. Yup. We were standing on the corner or Pennsylvania Ave. at the 800 block.

We walked to 1600 and just as we got there the Capital Police began shooing people away from the White House viewing spots. We never did find out why and none of us gave it a second thought.

We walked so much trying to decide what to do that we didn't really do much besides walk around. We did get to spend 30 minutes in the Space museum before it was time to go back to the motel and change for dinner and the match.

Our hotel was very European, the price was right, it had very few amenities but it was clean and more than good enough for a place to sleep. It had a couple of nice touches, like the bathroom window that opened to the hallway. The Americana Motel has remained a family place, refusing to sell out to the big corporate giants. If you go to DC, this is a decent place to stay. None of the fluff you get with the big guys, keeps the price low.

Keeping in with our Washington tradition, we had duck at our favorite place in Crystal City. You need to like spicy to enjoy this duck specialty. I had to stop eating for a few minutes to hyperventilate and wipe the tears from my eyes. Then it was extra white rice to put out the fire on my tongue. That soon passed and we adjusted to the heat. YUM. 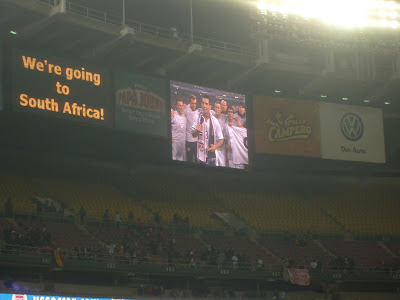 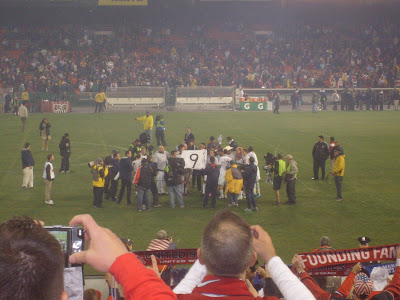 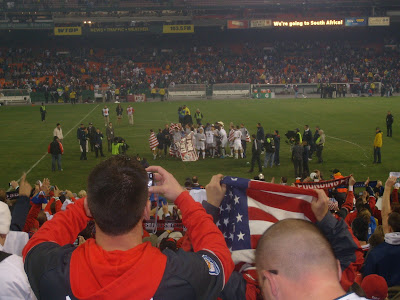 Looking into the bathroom from the hall. 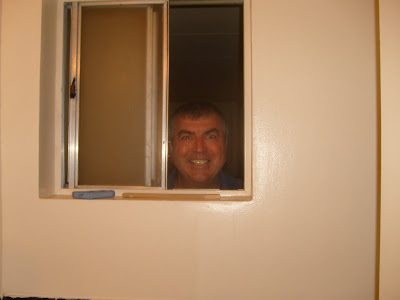 Americana Motel, dwarfed by the Marriott Hotel. Our room overlooked the highway 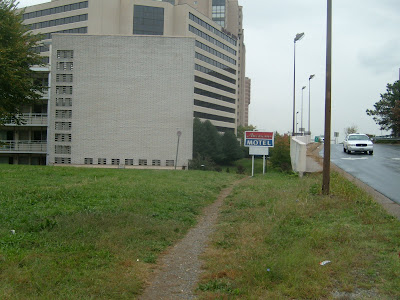 Posted by amidnightrider at 7:19 AM No comments: Links to this post 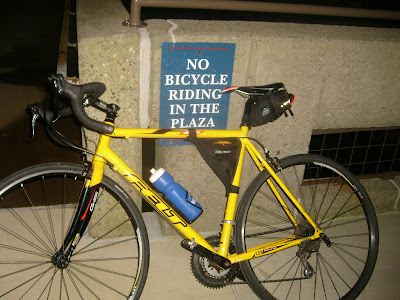 Thursday and Friday were nice enough for night rides. The FBC crew took on the streets of New Bedford and Fairhaven, MA. The only time we have any kind of confrontations with motorists is in New Bedford. They really don't like people on bikes mucking up their potholed roads.
Read the full story
Posted by amidnightrider at 4:52 AM 1 comment: Links to this post 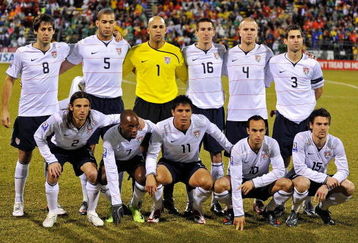 We'll be picking up another bike for a single speed conversion tonight. The Raleigh may be ready this weekend and if all goes well, we will begin work on the second. That will give Brandon and I a single speed each for winter riding.

There is another regular commuter in the Industrial Park. We crossed paths last night and I'm sure we will again. He is new to the area, moving here from WI. I could see that he was a serious rider and I wouldn't be surprise to see him join our touring posse.

Everything is a go for next weeks game in DC. The American Outlaws will be representing along with The New England Brigade of Sams Army.

Our group will travel Wednesday morning, spend the day in DC before traveling to JFK for th 7PM match. This will either be a celebration of the US qualifying or a must win to earn the chance to travel to South Africa in June. Either way, the place will be rocking.
Posted by amidnightrider at 6:18 AM 1 comment: Links to this post