The number of trick or treaters' will approach 200 tonight. It's important to get home right after work to be there for the toddlers who are dressed to the nines and get lugged around by the moms. Then the grade schoolers arrive. This is what it's all for. Some are very creative, some just lazy looking for free candy.
Later the streets will fill with cars loaded with city kids. Why they don't park and walk still gets to me, because most of the people put putting down the streets are the ones who most need to spend a lot more time walking.

Around 8PM is the guard duty time. The lights are out to signal we are out of candy and I'm outside watching for the teens roaming the streets looking to pull pranks. More of a pain in the ass type of pranks, but annoying none the less. I'll be out directing them to the neighbors houses.


Halloween is one of the two that I personally enjoy. The end of the harvest season when the worlds of the living and the dead overlap. Costumes and masks are worn to mimic the dead and placate their spirits. It was originally a celebration of the final harvest of the growing season among the ancient Celts. It was also their new year celebration. Now it's just fun.

Easter is my other favorite. The first Sunday after the first full moon of the spring equinox. A time of new life (lilly) and abundant life (rabit). When day and night are of equal lentgh. A raucous fertility festival that has been toned down to a family gathering in my household.

If your in the neighborhood, come by tonight and get your treat. But keep an eye on the roof and bushes. You never know what spirit will be lurking.
Posted by amidnightrider at 6:08 AM 7 comments: 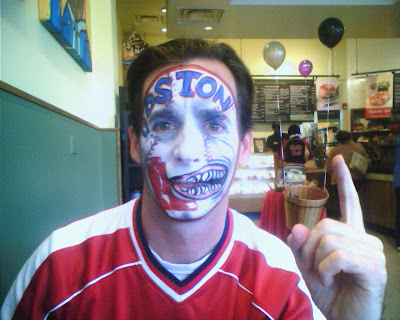 My two sons are in Denver and managed to get tickets to game 4 of the world seried. #1 son Keith called me yesterday and asked me if I was familiar with chanell 10 because they had just interviewed both of them outside of the stadium in Denver. They were on their way to a Halloween party and Keith was made up as "The Obnoxious Red Sox Fan", which he is by the way.

Keith has been in Colorado for around ten years and before that was in upstate New York for eight. His Massachusetts accent is long gone. Todd has moved around the country and now lives and works in Atlanta, but developed a neutral accent during his years as a salesman covering midwest and southern states. During the interview, they both "turned on" thier Massachusetts accents and also made sure to include the South Coast dialect.

To get a copy of the footage the TV station requires a payment of $30, which is not a big deal for something that is so special in our family circle. The problem is the four to six week delivery time. That not only will be old news to share with friends, but in that time frame, it will be meaningless.

Hopefully something can be worked out to get to share the footage soon. Possibly a personal visit to the studio. We'll see.
Posted by amidnightrider at 5:22 AM 2 comments:

I am one of those fortunate people who have more time than things to do. Biking is a major activity in the warmer weather, but late fall, early winter is transition time to racquetball.

One of my racquetball friends recently began taking the kickboxing class at the Y. People I asked said it wasn't that tough, but if I found it so, just stop and take a break. Simple enough for sure and that's exactly what happened on Tuesday. The biggest problem was coordination. I had to start slowly, paying close attention to the footwork of the experienced people in the class. I got the rhythm soon enough, except when I looked at Mark, my racquetball partner. It was like trying to sing a duet with a tone deaf partner. He was so out of step that he looked like he had cerebral palsy.

Realizing that some of the muscles being used had not been challenged like this in years, there was going to be a heavy price to pay the next day. Wednesday saw not much in the way of soreness but a nasty cold was developing. Thursday was a full fledged cold and a body wracked with lactic acid.

Things are slowly returning to normal and a weekend of working a cushy desk job should complete the recovery in time for kickboxing 2 on Tuesday.

One of the attractions of kickboxing is the fun. But there are other reasons. 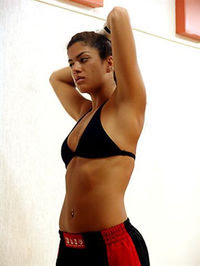 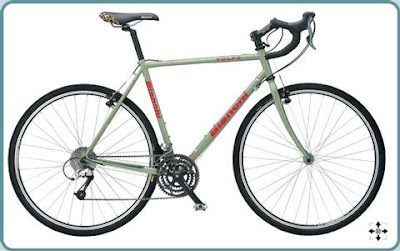 The commute to work is most likely done for th season, but who know for sure. The trade off is going to the Y for some weight and cardio training. Riding bikes just did not do anything for the weight. Also, there are lots of road bikes lugging around some very big bellies which reinforces the need to do something else to get and stay trim.

A new bike is also in the works. REIs Novara Randonee looks like the one. Trek's 520 and Fuji's touring bike, and lastly the Bianchi Volpe, are also outside possibilities. 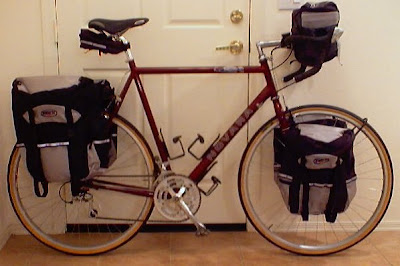 It will be steel and it will be a touring bike. The touring bug has bitten and the virus is dormant for now but no doubt will re-emerger in the spring.


Unless things change, one of the rides next summer will be the Erie Canal towpath from Buffalo to Albany. That can be done by taking a minimum of vacation days bracketing a weekend. A motel tour, carrying a tent just in case.


Reading***** "Skinny Legs and All" by Tom Robbins
An Arab and a Jew open restaurants across from the UN...... It's not the opening line of a joke, but the book is as funny as your imagination takes you from the line.
Posted by amidnightrider at 7:20 AM 8 comments: 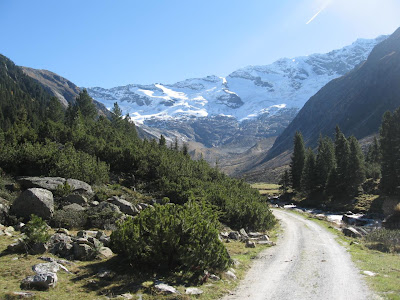 The bike tour of Austria was way over the top. My expectations, especially of the sights were high. Those expectations were exceeded.

Lots of great riding, hiking, sightseeing and eating. (Especially if you like wiener snitchel).

I am in the process of updating the whole thing at my Crazyguyonabike.com journal.
Posted by amidnightrider at 5:27 AM 5 comments:

Gone riding for a few days. The details are postted on the crazyguyonabike.com site.
Posted by amidnightrider at 12:21 PM 2 comments:

Lucy, a pound puppy, will soon be joining the clan. According to the pound rules, a stray cannont be tended to for ten days. Actually, the dog should be in solitary confinement for that time. Lucy is too small and too cute to have to go through that. She is a straggly little thing, who gets along great with our deaf cat Midnight, and has been spending nights with us as a foster dog. Once she has been cleaned up and checked out by the local Vet, she will be ready to move in.

Lucy is able to sneak up on Midnight, because of his deafness. Midnight retaliates by positioning himself for ambushes against an unsuspecting Lucy. Not unlike Cato of the Pink Panther fames.

Posted by amidnightrider at 6:13 AM 6 comments: