So Quiet Around Here 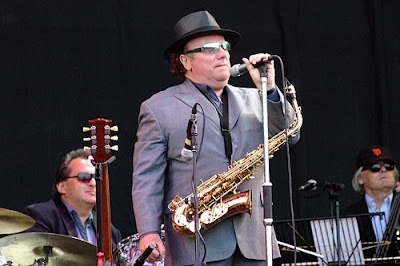 Those are the Van Morisson lyrics I had bouncing around my brain this morning.

The winter gear is gradually being removed from their off season homes. Today was a day for a midweight jacket, light gloves and the stocking cap. Rear blinkies are necessary now that sunrise is more than halfway through the 50 minute commute.

This day, no vehicles passed for the first 4 miles. I had the dimly lit suburban streets to myself. Once on Rt. 140, the story was different. Cars and pickups passed in bunches like a line of trains. It's the harried driver that gives me some concern. The one that is behing the pickup who moves left to go by the bicyclist. He is the one that inevitably moves to the right to see what the other guy is moving left to avoid.

This is day two of my annual post summer/pre holiday fitness regiment. I use the Body for Life system which works very nicely and it's pretty easy to keep doing. Especially if, like me, you like to cook. With all that, part of the Tuesday and Thursday commutes are used for fitness hammer rides. Around 20 minutes. Not that bad at all. It also means that commuting is limited to two days a week. The gym and weight training take over M-W-F mornings.
Posted by amidnightrider at 7:35 AM 2 comments:

The drive to the park and ride followed a magnificent full morning moon. During the 30 minute drive part of the commute, I got to know a few of the regulars on the highway. The kid on the motorcycle being the most obvious. He passes me right around the same area every day. Hunched over, his chin almost touching the handlebars, backpack filled to near capacity. Today I wondered how much longer he will be on his bike. The cool weather and 70MPH wind chill on the bike will soon make that kind of commute very cold.

I arrived at the lot aroud ten minutes before 6AM. The first commuter bus of the day made good time I noticed, as it came up the off ramp to the mall. It's usually there a few minutes after 6. Daybreak had not yet happened and that allowed for a very leisurely preparation for the bike part of the commute. Unpacking the bike, checking tires, loading up the trunk bag and backpack. Today was the first time the back blinkie had to be used. That will be a regular as we gradually loose morning daylight.


The planned hike of the Blue Hills near Boston was replaced by a two hour dog walk in the rain on Saturday. An unbrella kept me pretty dry, but the pups, Lucy and Polly got soaked, and loved it so much that we did it again on Sunday. Twice.

Tonight the moon will be full, so there is a bike ride. Meet at Pub99 in Fairhaven at 8PM. Bring watever you need to have a fun bike ride.
Posted by amidnightrider at 4:55 AM 1 comment:

The US has accumulated six important points toward qualifying for the 2010 World Cup in South Africa, with a victory over Cuba last night. If they go, I go, so naturally I'm ecstatic. It's too bad that Yanks have to hide thier faces from Big Brother. Spending thier own hard earned money in Cuba is still a no no to our backward government. This embargo should have ended 40 years ago and we need to accept that we do not own and control other countries. Besides, Cuba is a great place to bike tour. (More so the second time).

Now the Revs? That's a whole different story. A 4-0 crushing defeat is having the most diehard of us fans wondering about our chances of getting through the first round of the playoffs.

Time will tell.
Posted by amidnightrider at 7:18 AM 5 comments: I stopped by a neighbors house last night and they had the RNC Convention on TV. Watching the crowd, all I could think of was North Korea. They had "so called" home made signs and every time McCain said something he though was relevent, he gave that forced smile and the delegated stood up and raised their cards. "When I say jump"... As for his VP pick. Wow! As a lifelong Liberal it makes me very happy. Remember Jamie Spears? All the news pundits ganged up on her and called her parents "pinheads". With this gang, we are supposed to give a free pass on morals. I don't think so. But Jamie Lynn stepped up

Abstinance only education in Alaska. Yup, that's the ticket.

Ganging up on a woman is now off limits. So, I suppose when Russia's, China's or a Middle Eastern leader says something, they have to take into account that Palin is a woman, and not say anything against her? That's not going to happen.

I can picture her in a meeting with a foreign dignitary? It would be like the commercial when they guy pulls out the credit card with a cartoon character on it to pay for a business meeting.

After eight years of the dismantling of our democracy it is such a warm and fuzzy feeling to see the GOP self destruct.
Posted by amidnightrider at 5:07 AM 3 comments: