A Couple Of Things

If I mention I like something around the holidays, I often get over indulged.  Biking for example. Everyone who bought me a gift gave me a bike related book.  One coworker gave me a book of 1001 tips on riding a bike. I accepted it graciously because it was thoughtful, but something suited for a novice.  My sons got me bike books, one of which I really enjoyed and was written by David Byrne of Talking Heads fame.


Bicycle Diaries chronicles David’s observations and insights — what he is seeing, whom he is meeting, what he is thinking about — as he pedals through and engages with some of the world’s major cities. In places like Buenos Aires, Istanbul, San Francisco, and London, the focus is more on the musicians and artists he encounters. Politics comes to the fore in cities like Berlin and Manila, while chapters on New York City, and on the landscaped suburban industrial parks and contemporary ruins of such spots as Detroit, Pittsburgh, and Columbus are more concerned with history in the urban landscape. Along the way, DB has thoughts to share about fashion, architecture, cultural isolation, globalization, and the radical new ways that some cities, like his home town, are becoming more bike-friendly — all conveyed with a highly personal mix of humor, curiosity, and humanity.


We heard a bang outside and the dogs began going nuts.  I though it may have been a car accident till wifey said it sounded like someone slammed the breezeway door.  I look out the window and saw and unconscious hawk on our porch. He soon recovered but remained there dazed for around 30 minutes. I was able to get withing a couple of feet for this photo. 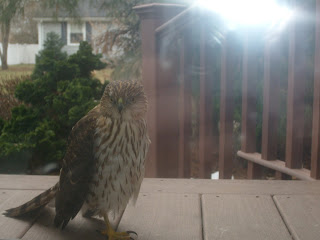 I decided to ride the SS to the market.  It still didn't feel right even with the bar ends installed in the "bar middle". I went for a short few miles repositioning the end and settled on a relatively upright position.  The bike is still not quite right and I'm thinking a new saddle may get it to an acceptable comfort level.  It's something to do on a chilly 35 degree Sunday afternoon.  Ride to the ocean, yea....that's the ticket. 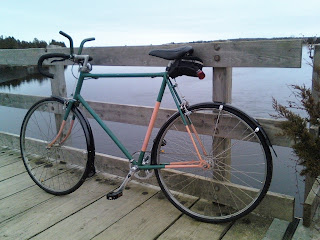 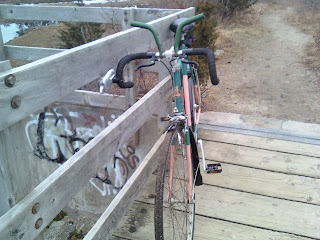 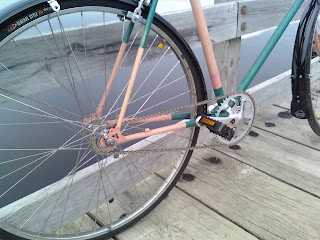 It's not pink, it's Salmon colored.
Posted by amidnightrider at 5:03 PM