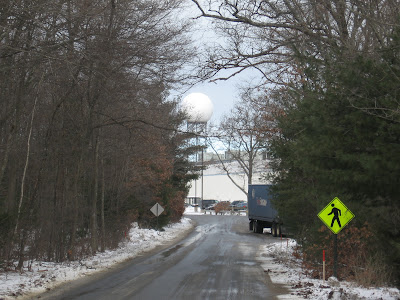 How do they do that? The Dopler Radar is almost within spitting distance of my office. Across the road is the National Weather service station. The prediction for Sunday (day) was "possible snow showers". I can live with that for a five mile ride. Just before I left the house I checked "weather on the 8's", on the Weather Channel. The phrase, "possible slushy mix" sealed my decision not to ride. 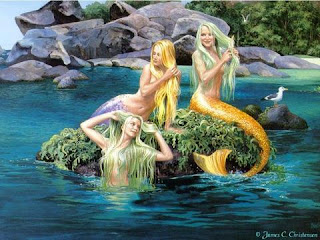 Taunton, Ma. at 7AM on a Sunday morning is very quite. The streets, the temperature and the lack of wind were like Sirenes, calling all bike riders. One could almost envision thier song and beauty calling, "ride your bike today, ride your bike today".


The snow began around 9AM, and by four o'clock quitting time, bike commuting would have been very challenging. It could have been done safely traffic wise , but because part of the route would be riding a bicycle through the Asylum grounds, (in a snowstorm, at dusk), there would have been a good chance of an encounter with the staff.

The drive home was slow, the plows were out in numbers, and the 5'6 guys in their big ole SUV's and pickups, still don't realize that everyone can go fast, but the bigger you are, the more you spin and slide and crash and roll. By evening however, the wind was howling and the snow showers had turned into a whiteout. Even the dogs would not venture off the back porch. 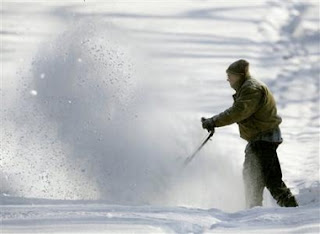 Monday began by shoveling almost a foot of snow out of the driveway and walkway. A foot! Not bad for a prediction of 1-3 inches. I guess they use American Football standards, and multiply everything by 7.

Things are looking good for Tuesdays commute. According to the weather service.
Posted by amidnightrider at 7:14 AM