Tuesday, a coworker had been asking about my commute. She said, "maybe I'll ride it sometime next week".
"Why not tomorrow"? I said.

She met me at the park and ride at 6AM, roaring to go. A bike with two nearly flat tires, rusted cables and a slipping chain. Then she pulled the biggest backpack I had ever seen, out of her car.
"What the heck you have in there?"

To be fair, it was her first work commute. Overpacking is common for most people and her packing a change of clothes, shoes to match the clothes, a book, and a side of beef, is understandable.

I let her set the pace and she lead us to work at around a 16mph spin. She did fine. One glitch was when she mentioned that her pack felt funny. Things seemed to be shifting. She stopped and as she began dismounting, the thing exploded throwing cloths half way into the road. Being the good riding partner, I immediately reached for my camera. Unfortunately, I was too quick on the trigger and the photos came out unrecognizably blurry. 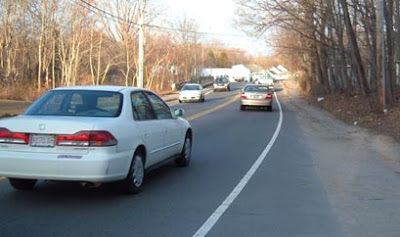 The commute home was a treat, doing the same route in heavy traffic. She is off till Tuesday and we will see if she becomes a regular on the bike.
Posted by amidnightrider at 5:32 AM