Rain and Other Roadblocks 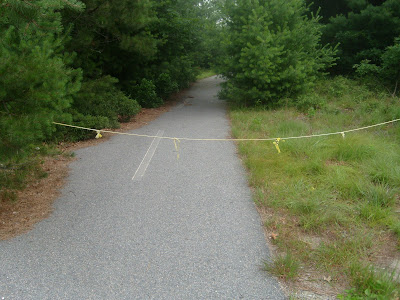 June has been a horrendous month for bike commuting. With a four day tour only two weeks away it is imperative to get some miles. The radio weather man said that June had 24 days of rain.

The weekend would have been good commuting for work, but the music festival journaled in previous posts, took preference.

When all is said and done, I will have worked thirty three consecutive days, which could have been a phenomenal amount of miles. But alas, the rain.

The ride takes me through an abandoned State School. Paul Dever, which as I understand was for severely retarded children and adults. The building are sill around as is some of the equipment. Much of the stuff looks like something you would see in a horror movie. I know there was no ill intended, but back then it was what they though was best for the patients.

The buildings on the boundaries are still used as residence homes and I figure that they have problems with kids on dirt biks. There are so many attempts to block the old paths. Besides the two I have pictured, there is also a good sized pine tree that was cut down to block the path. None of the blocks are much of a bother to bicycle or walkers. It just slows us down for a couple of seconds. 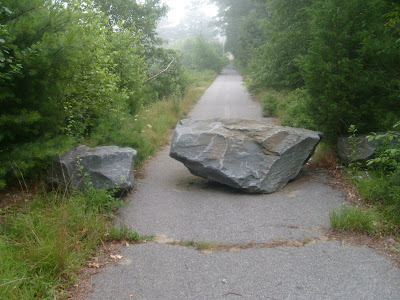 I got caught in a good downpour during the homeward bound commute this Tuesday evening. The original prediction was 40% chance of boomers and rain. Good enough odds for me. By noon, it had changed to 60% and by 4PM when we were in the middle of a thorough soaking, they changed it again to 80%. However, like most of us regular commuters can attest, summer rains are not bad at all.
Posted by amidnightrider at 6:03 PM