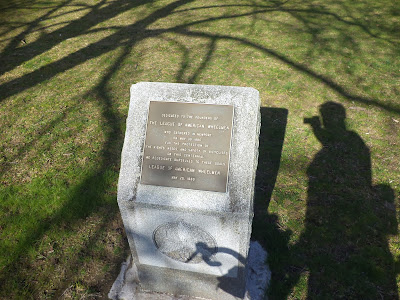 This is a big deal not only because Newport is a very bike friendly city but more so because the city is also the birthplace of The League of American Bicyclists which was founded as the League of American Wheelmen in 1880. Bicyclists, known then as “wheelmen,” were challenged by rutted roads of gravel and dirt and faced antagonism from horsemen, wagon drivers, and pedestrians.

The festivities began at city hall where the mayor, police, the state department of transportation, the Leagues of American Bicyclists and the bike kids of Newport all gave brief statements and presentations.  Most of those in attendance took a celebratory ride around downtown Newport. Bikes for those who did not bring one were provided by Newport Bicycle and the riders were invited to gather for a social at The Fifth Element where bar meets grill.

The award was the culmination of years of dedication and hard work by http://bikenewportri.org/ and their director Bari George. 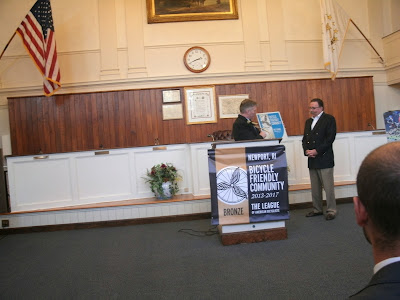 Congratulation to the city of Newport R.I. the first Bike Friendly designated city in the State of Rhode Island and also completes the representation that now has all six New England states represented in the League of American Bicyclists designation.

Newport Bronz Award from John Sullivan on Vimeo.
Posted by amidnightrider at 5:39 PM