That's what it took to protect the house from the ghosts and gobblins roaming the streets on Halloween evening. The street scene looked very much like the one in the movie, "It's a Wonderfull Life". Every house had kids at the front door. There was a constant flow of princess', spidermen, draculas' and witches criss crossing the street, warding off the evil spirits with screams of glee.

Things calmed down around 8PM, the lights went off and the candy count was 204 bribes.

For those who are into team sports, it's a good time to be in New England. The Revolution are in a playoff run. Parkhurst won the leagues fair play award, and his sixty yard strike is in a tight race for the MLS goal of the year award.

The Red Sox won the league title, the Celtics, look to be back in form, and the Bruins begin league play. 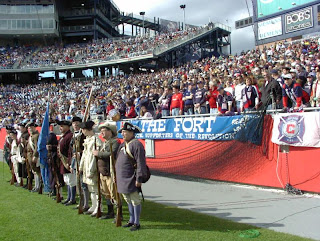 Saturday evening all of the Midnight Riders will be representing at Gillette Stadium for the home leg with Red Bull NY. (The hated New York.) Third time is a charm and maybe, just maybe the curse of Stapo will be broken.