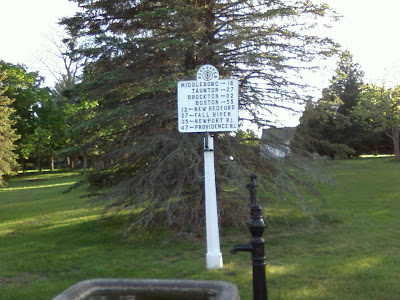 The temperatures dropped substantially from 92F to a relatively cool 74F for this Thursday afternoon ride. The above distance marker is a relic from the early days of automobile travel when this was the main route to all the cities and towns on the sign.
The water pump works and delivers cold refreshing well water.

I went out to do a hard ride and soon ran into a young kid riding down the middle of the road. He kept looking back and seemed to have thoughts of outrunning me. Kids hate to get overtaken on a bike. I simply kept my spin going and realized he was just bopping along and looking back for traffic. Personally, I have to really work at not chasing or trying to outrun another bike. I have gone as far as dismounting and having a drink on those times when I can't shake that competitive urge. When I came upon him I slowed and noticed he was riding a Trek and I complimented his bike. He was so proud to be acknowledged, that he seemed to have just a little more umph in his ride. I went into afterburners and soon had my speed up to 11mph. Seriously, it was a really good night for me. I found myself riding at 18-19 mph most of the time. Some days you ride fast, some day you slog. Last night was quick.

A couple of miles later I came across another guy struggling on a slight incline. I pulled up along side to say hello. He complained about being out of shape and I assured him that round is a shape. His tires were at least 700x35 or maybe wider, with knobs. My legs began to hurt just watching him mashing those pedals.

It was a really nice night for riding and the two hour spin more than made up for the missed work commute.

See you around
Posted by amidnightrider at 6:08 PM