Didn't get up early enough to do a long commute. The regualar will suffice.

Friday a car full of kids tried to run me off the road. In heavy city traffic no less. Just ahead the traffic was backing up right at the intersection I turn left. I did my best to catch the offending Chevy, with water bottle in hand, but they managed to get through just as I got there.

Both computers are acting up after washing the bikes. Today I caught myself doing 144 mph, and halfway through my 11 mile commute, it said I had completed 23 miles. Now, I know enough to remove the computer before washing. 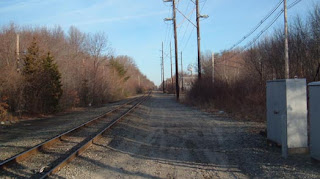 The mornings have been quite cool, actually jacket weather. Someone chainsawed down a huge tree across the bikeway through the old state school. That detour lead me to try cutting a quarter mile off my commute by riding along the RR tracks. It did take mileage off, but added around 20 minutes because of the rocks and soft turf.

B, got arrested for driving without a license, and dwi on Friday. Expecting around a five years loss of driving (minimum), jail time is also a concern. Court date is Monday. The question is wether or not he had reached rock bottom and will take action, or if he will return to his old ways after a couple of weeks.

Tried the road bike for commuting today. It is very much faster, but really, when on a bike, one should not be that concerned about time and speed. Kind of a "swimming against the tide" type of thing.

Tomorrow is the last Spanish class. Next Monday is the final at a local Spanish restaurant. No English allowed. Should be fun. Voy a beber una cerveza. Or two.
Posted by amidnightrider at 10:55 AM