Day off Work Ride with Sue 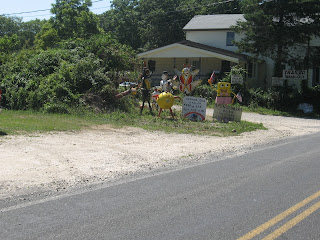 
A hot an humid day off. After working at the pound Sue agreed to ride the Westport point route. We drove to Village Cycle, and embarked on a 30 mile ride around the county and seaside sections of Westport Point. 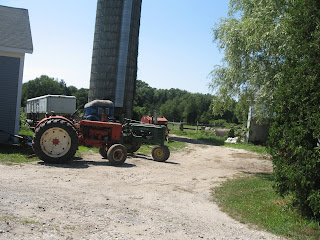 The ride began in the farmlands of the town, Charlotte White (pronounced, cha lott' ay) by the locals. It's kind of a code to let them know who is native and who is tourist from NY or Conneticut. Funny thing is though, the out of state people have had family in Wesport for many more generations than the natives. The "point" has always been a summer getaway for the big money families of those states.

The area is mostly quiet country roads that criss cross the southern part of the town. Westport is large town that in it's heyday was mostly farms. Dairy and some crops, but mostly dairy. Many of the large farms have been broken up and sold off as housing developments. Clusters of these pop up in what initially seems, the strangest out of the way places. The country road loops back to Main Rd and Westport point, and the Paquachuck Inn. It's an area of old Yankee money. Most of the homes were summer getaways for the well-to-do city folk. One can easily visualize horse and carriages traveling the narrow streets among the stately 18th and 19th century homes. The pier at the tip of the point is filled with lobster boats. They are all back from a days work by noon and the captains are making deliveries to wholesalers or directly to some restaurants. Although there are some pleasure craft, it's basically a working pier. To get to the beaches it is necessary to back track a half mile to Drift Rd. the original access road to the point from the town of Dartmouth. A short stretch of highway riding before crossing the Rt88 bridge that access Horseneck Beach State reservation. The far end of the reservation is East Beach. It's another summer spot where residents move thier trailers onto their lots for the season. The town requires them to remove them during the winters because of the severity of the ocean storms. The turn from East Beach to Horsneck Rd was made just in time to have lunch at the The Bayside. A light lunch complimented with a sweet Reisling served as a great break. Roy the cook struck up a conversation when he saw the bikes and took the time to fill our supply of water. The loop was completed one rolling hills thru the wine district and finally crossing the Westport river over Hix Bridge. Riding the back roads and main street of Westport proved to be a great way to spend a summer's day away from the daily grind of work.

The slideshow of the day is HERE

Posted by amidnightrider at 6:59 PM