How Many Bridges Cross the Cape Cod Canal?

A day off from work allowed me to finish off my shopping for the holidays. The last stop was the Mashnee Island Grill, home of the Quohaug Republic. I brought along "winter bike" and rode from the canal to the island then continued on and rode the lenght of the canal. And back of course.

I had a few more photos to post, but it seems I have used up my 1G of space. More will be posted as soon as the issues is resolved.

Bourne and RR Bridges over the canal. 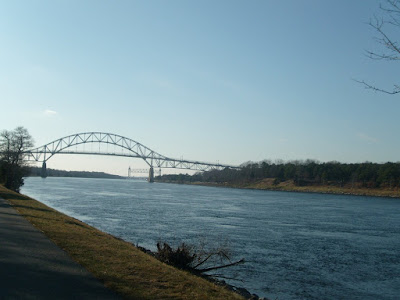 Ahhh, the RR bridge. That also gives the answer to the title question. There are three bridges crossing the canal. Bourne, Sagamore and the rail road bridge. 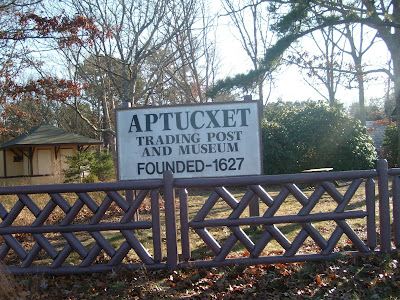 The sun was shining bright for the ride out to Mashnee Island. After a quick shopping spree and a tour of the "closed for the season" grill by the owner Erik, I packed up my back pack had began the ride back to the car. The weather changed very quickly once the clouds rolled in. The wind picked up a little and the temps dropped to the low fortys. Still comfortable enough to continue the seven miles to the North end of the canal and lunch.
At the base of the RR bridge crossing the canal. 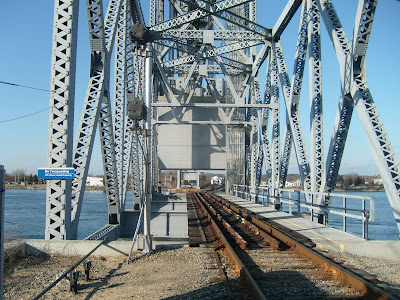 A seven dollar sandwich, (things tend to get pricey on the Cape), at the north end of the canal, in a good sized gazebo, allowed me a great view of the power plant. {{{{wonderful}}}}. This on a ride that was originally intended to get "green" photographs for a contest at MoveOn.org. If your not familiar with Move On, it's a progressive group who keeps many informed about the goings on about our government in a non partison way. Very much like Fox News, but for people under 75. Anyhow, a couple of vessles made their way through the canal including a very interesting Coast Guard bouy tender. The ship was laden with barnacle covered, rusty, navigaional bouys from some channel or other. No doubt being delivered to the "bouy shop" for cleaning up and a fresh coat of paint.

The return trip remined my why there were so few people on the canal trail. The wind. Holy mackerel! The comfort of the out bound ride made perfect sense. The wind was moderate, but add the radiational cooling from the ocean? {{{{{brrrrr}}}}.
The toes suffered the most, and I really didn't see much because my head was ducked into my chest and being hunched over as protection from the cold wind, didn't offer much incentive for photography either. Like most physical things, when it was over, I was glad I did it. But I wasn't thinking that while riding. 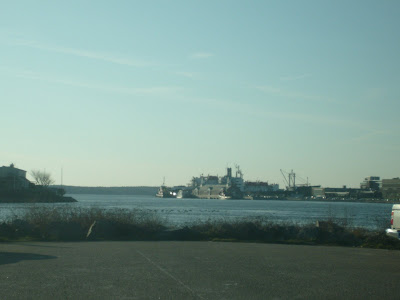 A major snow storm is forcast for this afternoon, (Friday). That will but an end to riding for at least a few days. A possibiltiy of rain on Sunday could clear things up, but then again, the rain could make things a lot worse by changing the nice fluffy snow into a mix of ice and slush.
Posted by amidnightrider at 6:37 PM