If you have ever been to New York you know it's one of the coolest cities in the world. It's a five hour bus ride from our little city on the south coast of Massachusetts. A bit longer than driving it yourself but the bus is not a bad way to travel.

Off and on heavy rains greeted us on Thursday and lasted throughout the day. Friday turned out very nice and allowed us to do some great walking activities. One of my favorites is the walk across the Brooklyn Bridge.

Another is Times Square, which by the way is close to vehicle traffic. That was a really good decision by the leaders of the city. There were lots of complaints before the closing that were pretty much exclusively traffic related. That falls on deaf ears to those of us in the bicycle community. 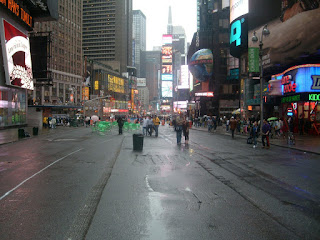 The food. Again. The food. Everyone braggs about the style of cooking where they live. The southerners are very good at making the "food of the south" sound like it's the best in the world. Every tried it? It's good, but by no means do we us a capital G in good southern food. A place as big as NYC you are bound to find Good Food. We found this Mexican restaurant on the corner of 50th and Lexinton in Manhattan. They advertise the best guacamole you will ever taste. So far, they are right. It's the best I have ever had. 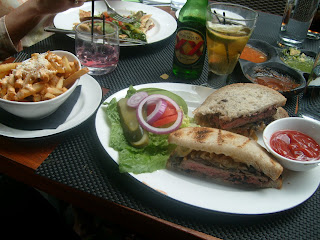 Dos Caminos on 50th and Lexinton. Put it on your list 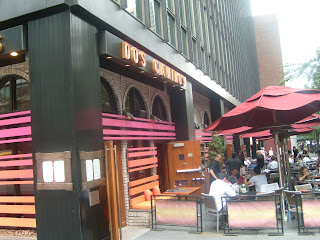 A walk through Central Park is also one of the more interesting things to do in the city. All the fields were being used, mostly for softball this day. The usual banter could be heard at these venues. However there was a different tone coming from the fields up the hill. Lots of good natured cheering and geering. It was kick ball games. Not your usuall playground matches either. The thing that struck me was the pitching. They rolled that ball as fast as they could with lots of spin. Needless to say, "bunting" was the most common play. Thats when the fun started.

These were all twenty something players who took the game very seriously but managed to keep things upbeat and fun. The kind of thing you can only pull off in New York, and something you really have to witness to appreciate. There was a lot of in your face talk, but it was back and forth. And when one player struck a cord he would get a finger pointed at him and a head nod by his adversary with a "ok, you got me" look. 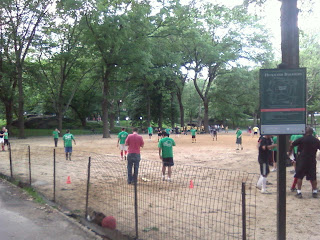 There were tons of bikes riding the streets of Manhattan, and you really have to be ready to get a photo. They appear and ride by very quickly. It's always said that if your in a hurry, you don't belong on a bike. Well in Manhattan, a bike is without a doubt the fastest way to get somewhere.

Hundreds of these around, but some of the drivers seemed very shady. Especially in Central Park. A good thing going bad. 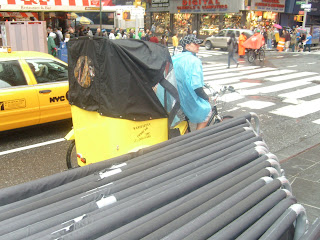 We also spent some time in Brooklyn at the Botanical Garden. Later we wanted to have pizza at a place right under the bridge but the line of people waiting to get in made that impossible with our time limit.
Waiting for the 3 train in Brooklyn

Dead Heads at the Brooklyn Museum

Upper East Side (I think) from Central Park

Posted by amidnightrider at 5:26 PM