We parked a few blocks from Ten Speed Spoke bike shop to avoid the crush and crazies around Thames St. in Newport, R.I. Actually it was a couple of blocks from First Beach, Gibbs Ave. is also where #2 son lived when he was working in the area.

The night before I got distracted while loading the car with all the bike stuff and neglected to pack my riding shoes. I was able to buy a new pair at 10 speed for only a hundred bucks. $80 for the shoes, $20 for the clips. I have to say however that these are really, really comfortable shoes. If I had tried them with it being a necessity, I would have purchased them.

By the way, there was one other thing. While we were riding to the shop, I noticed a police motorcycle with the lights and sirene blaring. My first thought was to stop blasting through red lights and stop signs. Then I realized he was leading the paceline. I turned to my riding partner and said, "It's six oclock, we're late". It was after 6:30 by the time I got my new shoes fitted and we rolled out of the lot.

Because of all the rain the last two months, riding has been at a premium. It seems that every time the weather would break, I would get stuck at work. I also began running again and my legs and body are still protesting. That combination made parts of the ride pretty difficult. There was one point when I was huffing and puffing up a good sized hill near St Andrew's School where a woman passed me. As she was doing this I wondered how she was able to stay upright going so slow. She was in a much higher gear than me, and I was lulled into a false sense of speed by my cadence, which was somewhere in the vacinity of 120 RMP as I was screamed up the hill at 6 mph.
This hill was a real struggle. 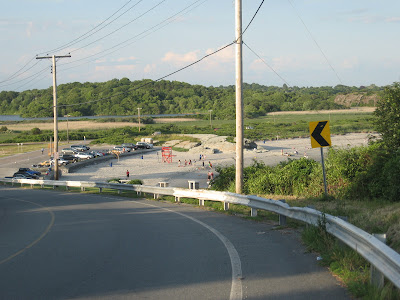 Along with the struggles, there were also lots of good to talk about,like riding by the mansions, which was pretty neat.


But the mansions take second fiddle to the beach. The volleyball section.

There were decisions to make. And like someone once said. "When you come to a fork in the road, take it".

We cut the ride to around 20 miles because
1. It was getting dark
2. There was pizza back at the shop.

Maybe those two should be reversed.

A no fee bike ride around Newport R.I.

All the pizza you can eat for free.

Nice.
Posted by amidnightrider at 6:15 AM