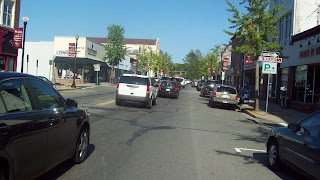 I'm sure when I think of work commuting will be what comes to mind.  The final commute ended with a bang, so to speak.   I have been riding through an old abandoned state school for the handicapped for a few years.  I got to know the security guards who drive around the place and even got to watch and take photos of a movie set. "The Surrogates" with Bruce Willis.   If you ever see the movie play close attention to the part when Bruce picks up a baseball.  Look behind him and watch for the extra riding past on a bike.  Just say'n.

That was off track a bit, but I couldn't resist the selfless promo.   Back to the bang thing.  On this last day of the commute I spotted the security car and it was empty. Since most of the guards are older and many smoke, I gave the area a good looking over. (looking for a body actually or a downed guard).   I was thinking about going around just to check when the car pulled up along side of me.  I was in the middle of the closed street and moved left.   This guard was young.  Maybe 22 or even younger.


"Sure" I responded.   And said nothing else.

"Whats in the bag?

"A grapefruit, some blueberries and a newspaper"

"A big bag like that for just that stuff?"

I had taken my dress up Friday clothes to the office on a rainy day earlier in the week and needed the pannier to bring them home.  I told him that if he was concerned he could call and any of the other guards would verify that I was a daily sight.   I also mentioned that if it would make him more comfortable he could check the bag and he agreed.  We both stopped and he got out of the car.  I handed him the pannier and he unlatched the clasp.  As he began to open the top I clapped my hands and let out a "brrrrr".  It was a cool morning and I was a little chilled.   When his feet finally came back down to the ground  I apologized for startling him and said that a chill came over me and I reacted spontaneously.  He gave my pannier back got in  his car and tried to act nonchalant.   Little did he know that I could see his heartbeat throbbing in his neck.   I know he will be on the lookout for me all week, but alas,  I don't work there any more. 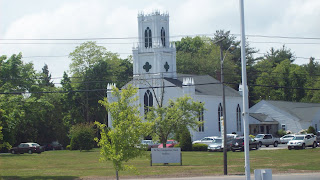 Sunday morning is always a good time to get on a bike and ride.  I started out on one of the usual routes but at a fork were I always have gone right,  I went left this time.   The new Felt bike is such an easy bike to ride that I gave it nary a though to increase the miles and try a different route.  Naturally I took a couple of wrong turns that had me going further and further into the unknown.  I finally decided to simply backtrack till I could determine which way was up and started the loop back home. 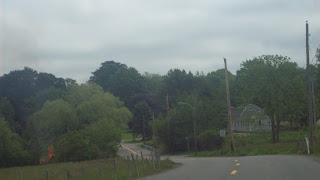 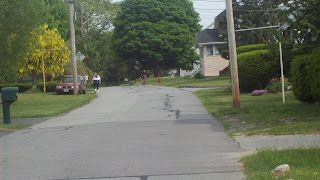 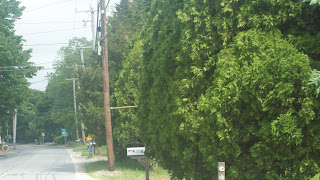 I stopped for an orange at a country store and ended up chatting with an old time rider for a good spell.  He began bike riding in the 50's and got away from it a few short years ago.  He still has his high tech Raleigh something or other in his barn from the mid 70's.  We never exchanged names but it was really interesting hearing his biking stories from the 50's and 60's.
Posted by amidnightrider at 4:37 PM