US Soccer Send Off Matches 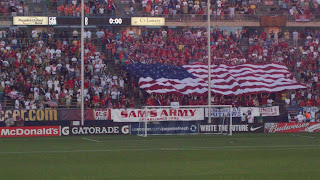 We decided to take the more direct but much more scenic, Rt. 6 through Providence, RI to Hartford.  An alternative motive is that we had considered riding our bikes the 110 miles from home to the stadium.  The rolling hills of Connecticut looked very difficult. It was hill after hill after hill for around 30-40 miles, and accomplishment for sure but fun?   I don't know?. 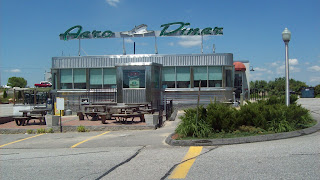 Rt 6 is a secondary road that has it's places that bring you back in time to the slower days when less cars were on the roads and people were not in so much of a hurry.   One place got our attention, The Aero Diner,  and we decided to stop for lunch.  The food was pretty good but it's not for anyone who is weight conscious, and that was very much evident when the regulars began arriving.  Besides the waitresses we were the only two people under 250 lbs.   I say 250 because of the women.  The men were much heavier than that.  Like most places,  like minded people tend to gather and I won't stereo type the whole area.  But for the regulars at Aero Diner for weekday lunch, I'm comfortable stereotyping.

The Czech game began at 8pm so we had plenty of time to do some sightseeing around the downtown area of Hartford.  We didn't know where to start so we relied on the old standby tactic of finding an outdoor cafe and people watch.  We did and two martinis later the amount of people walking by seemed to double.  They began to look more attractive too. Hmmmm?

Our hotel was within walking distance of the stadium which really is a bonus both before and after the match.  We were the first back to Margarita's Bar and Grill while the "drivers" were fighting each other to exit the lots. Even though the US got crunched, we all  knew that the coach was giving the fringe players one last look before the final cuts. The last match before the team leaves for South Africa is Saturday in Philly and we are  traveling to that one.  It should be a humdinger with both Turkey and the US fielding their first teams.

The American Outlaws warming up for the match 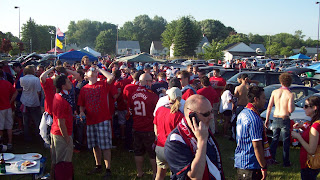 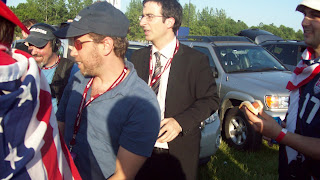 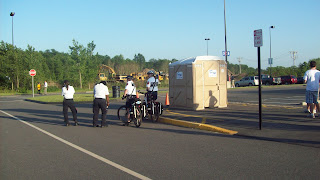 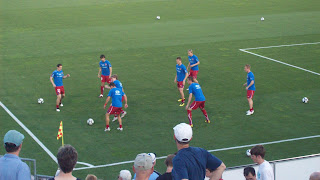 Posted by amidnightrider at 1:19 PM