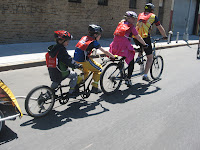 We were near the back of the pack. I was always told, "don't get caught in the family section". Last year I started out there, took the advice and rode hard for 10 miles to move ahead in the pack. Being with friends I/we didn't do that. There is a reason.

The problem with the family section is that many are not fit riders. Hills make them dismount and walk. There are other reasons too. Like this
When a few dismount and walk, the multitude behind them have to do the same. We finished the ride just ahead of the SAG.

Steve kept drifting in and out of our ride. Going ahead, falling behind, falling down. One of the things about riding with people is that usually everyone goes at their own pace, and we meet up along the way. If you know how to use a cell phone, they come in very handy.

We did lots of standing, lots of walking and lots and lots of riding.


Crys had been teased about Canadian pizza and was told that it can't hold a candle to pizza in America. "Lets try a Brooklyn style pizza", I suggested. We asked the cops on detail if there was one, they directed us to Russ Pizza. 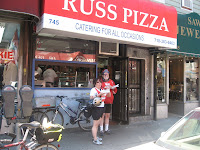 Steve kept telling Crys the proper way was to fold it. We both suggested that doing that would probably move the toppings from the pie to your hand or to the ground. There was lots of stuff. And I can confirm that pizza in Brooklyn is much better than the Brooklyn style the chain advertises.

The ride took us over bridges 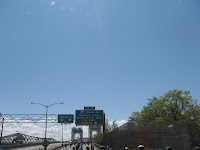 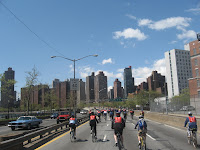 And we made the critical mass riders green with envy. 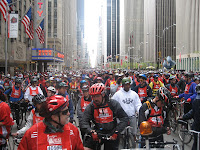 It's all set to music below. Enjoy.

Posted by amidnightrider at 7:00 AM