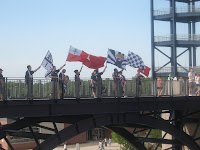 Saturday
Ireland/Bolivia.....Revs/Wizards.
That was the double header at Gillette Stadium on Saturday. The crowd was down for the international because Ireland, (who is normally a huge draw in Boston), came with the squad of youngsters trying for a spot on the A team. Very few of the regular Revs fans made an effort to see much of that game. We were all content to spend a little extra time in the lot, prepping for the Revs. 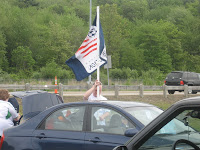 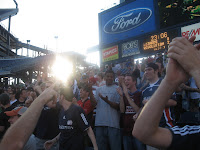 Kansas City has a very good record in New England. Not losing since Sept. of 99. After the Revs struck early twice, KC came roaring back to keep the streak going. A 4-3 victory for the Wizards. The "Fort", which is where "The" Midnight Riders reside, was spot on and loud for this one. Probably from the extra time tailgating. The exception of course was a free kick taken by our deteriorating Bermuda striker, Khano Smith The shot was hard, but it was so far off target it drew reactions like this

"On the bright side, at least it stayed in the stadium, and no unsuspecting fan was injured."

"It was unbelievable. The crowd hardly re-acted for a few seconds because we didnt believe it was an actual free kick. I was thinking maybe there was an extra ball on the field and he was just getting rid of that one. Nope. He is just an awful player."

"After that horrendous kick, he and Ralston lined up for a free kick about the 18 yard line. No doubt Ralston was going to take it (eventually off the post) but I wanted some kind of warning if Smith was going to take it because I wanted time to move my car from the West lot in case it got hit by the ball."

Many of the fans take a loss by the team personal. It must be a younger persons thing. Going to the games and getting to know the hometown players and those around the league is fun and interesting. But getting too happy with a win or upset with a loss, just doesn't happen for me any more.

Sunday
Sue and I spent some time with the dogs at the pound. She is a volunteer there, which by default makes me a volunteer. When the kennels were finally cleaned, the dogs were properly played with and picked up after, and they were given their treats of peanut butter on a graham cracker, we decided on an afternoon bike ride to the city. It was her initiation into urban riding. Traffic was lighter than usual because it was Sunday, but heavier than Sundays because of the holiday. 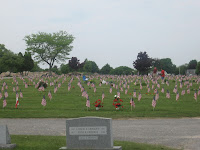 Taking the lead involved talking her into taking control of the lanes when it was necessary. Also portaging the bikes at the bridge, crossing a busy highway at the "quick" traffic light. Backtrack on a couple of one way streets and a few other common and uncommon techniques. I heard lots of complaining behind me. Things like, "I'll never ride with you again.' 'This is crazy and not safe". After a little explaining and a gentle reminder that I do this every day, she came around. All that is needed is some experience riding in traffic to show how easy it really is. No more getting off the bike at every left turn for her. Signal and take the lane. That's our motto.
Both days are on the video. There is some uncommon music thanks to limewire and bit torrent.

Posted by amidnightrider at 7:00 PM