The grass is growning like a teenager reading playboy. Three days of forecast rain forced the skipping of the Revs/Real Salt Lake match. Most of the RevGuess, predictions were for a two or three goal win for the Revs. 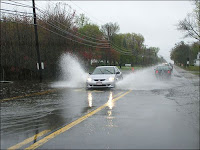 The weather forcast was for 30% chance of light rain today. A half hour later work start on Sundays, made biking very tempting. None of the stations bothered to mention the early morning forcast.

Torrential downpoars that made driving very difficult. A bike would have been impossible to ride. After the initial hour, the heavy rain subsided, and the day has turned into the forcasted occasional light showers.

The commuter is giving some problems. It could be the tire, it could be the wheel needs truing. There is a bumping with each tire rotation. It feels like a bubble in the tube or something stuck on the tire. A check tonight after work will have an answer. (fingers crosses).

This, was a shock. Steve was a very well respected and popular liberal blogger from NYC. There are some wonderfull eulogys from his fellow bloggers. James Wolcott, Daily Kos, Orcinus, and Jane a friend of Jesus' General patriot boy.

Speaking of liberal, with the expected election of a Democratic Congress, Senate and President, a return of the right wing violence is expected. Here is a good discussion on the topic.

"...in recent months, especially as the prospect of the voting public giving movement conservatives the boot loomed larger, we've seen cases like Chad Castagana, in which formerly mainstream conservatives -- self-admittedly inspired by the hateful rhetoric of people like Ann Coulter and Michelle Malkin -- have crossed over into actual domestic terrorism, inspired not just by hatred of the government but hatred of liberals."

There are a couple of bike film sites worth a look....

Street Films who advertise themselves as "Filming the New York City Streets Renaissance" and...

Tomorrow, (Monday) is the first day of evening Spanish classes. Two months of online learning was a good start. The campus is downtown New Bedford, Ma. which is not a safe place to leave a bike. No one could answer weather a bike was allowed in the building. The security guard said some professors will allow bikes in the classroom, but definitely not in the hallway. "How about baby carriages?" drew a blank stare from the guard.
Posted by amidnightrider at 7:12 AM