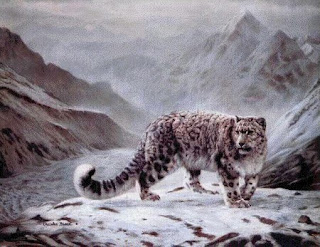 Trying to get a photo of the other commuters is proving very difficult. They are like the elusive snow leopards. You very seldom see one, and when it happens, a glance is it.

My main problem is "highway hypnosis". The commute in the morning is so quiet and routine that I very often don't remember much of the ride. There are six or eight other regualar bike riders at 6:30ish in the city. A city of 90+ thousand by the way. Eight biker riders, whatevahhh! 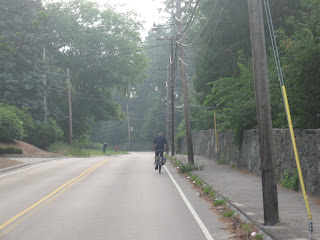 This morning for example, I was cruising along the main thoroughfare and "BAM" out of nowhere, a rider passed me going the other way. A little later, I did my regular stop at the local newspaper stand and just happened to see the commuter I have been trying to photograph for close to a year. I caught a quick glimpse just as he turned a corner through a parking lot, and rode behind a building. Later as I was about to exit the asylum, I saw a bike pass the main gate heading to the right. My route is left, but I wasn't letting this leopard get away. I chased for a little bit and got close enough for a photo.

There is a regular commuter at work, but he doesn't talk that much. Yea, no, hey, is about all I can get out of him. He is an upper level manager too, so I don't know what that is all about. Maybe he feels uncomfortable around union people. Who knows? He is ok though, 35-38 years old.

It's predicted to be very humid for the next few days. Temps around 90 and most likely hazy. The three "hay-chiz". Hazy, hot and humid.

There are a couple of after work rides to look into. One near the office and one near home. I think they are both on Thursday nights which forces a choice. Both would have been nice.

Later.
Posted by amidnightrider at 5:21 AM