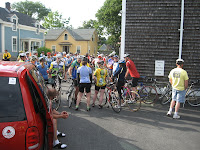 Ten Speed Spoke bike shop in Newport R.I. put on thier annual "longest day of the year" ride. Around 80 bikers showed for the event, most were hammerheads. A police escort was hired for safety, and they provided a motorcycle cop in front, and a patrol car took up the rear.
Photo slideshow here 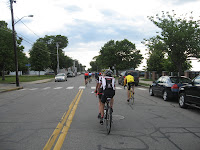 The starting gun sounded at 6PM and we were off. Little did I realize that we were suppose to keep up with the bullet. When the owner was announcing the rules and he said, "no one should pass the motorcycle", that should have been a clue.

I did manage to hammer my way into a paceline, looked at my computer and was stunned to see we were clipping along at 22mph. I planned to move up, find my buddy Steve and talk him into dropping back and doing a ride more to our liking, 12-15 mph.

I dropped out of the paceline a couple of times on turns, and was amazed how fast the space opens up. The rear police car continually sounded it's sirene and I imagine the lead motorcycle was doing the same. A quick rear glance showed 10 or so riders behind me. I lost the paceline again and this time there was no catching up. I'm thinking Steve was having a grand ole time being pulled along by all the hammerheads, and for the life of me, couldn't figure how he and some of the others were keeping up.


The police car seemed like it was trying to pass me. When I looked back, I was alone, the last rider. All the others had already dropped out. Enough of this I thought, and pulled over. The nice police lady stopped and asked if I was ok. I told her I was fine and she waved and continued on with full wail.

Once I dropped out of the "race" things got much better. I was able to take lots of pictures, stop at some interesting places and talk to some nice people. I spotted quite a few of the riders making thier own routes, as was I. There are some grand homes on Ocean Ave. aka Ten Mile Drive. 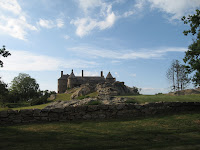 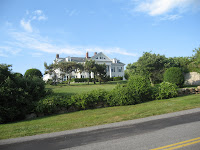 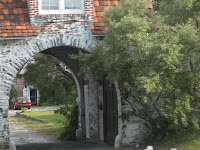 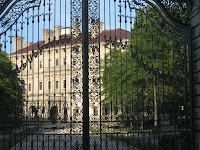 Bellveue Ave brought me by the really big mansions like the Breakers. Here is where while taking photos I drifted to the curb, caught my front wheel and over I went. No damage to anything or anyone. And, there was not a person in sight, which also salvaged my esteem. 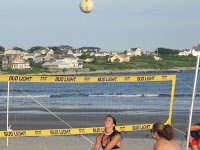 Memorial Blvd to First Beach was next. Surf, volleyball and a really hotspot nightclub. 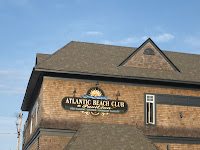 2nd Beach was the extent of my geographical knowledge of this section of the island. To contine was on a wing and a chant. Purgatory Chasm, Sachuset Preserve, a Puritan church and cemetary, St. George School and a couple of Navy riders. The extended ride into the unknow was well worth the chance. 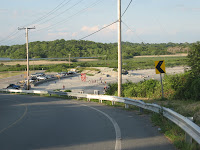 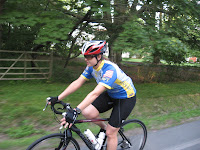 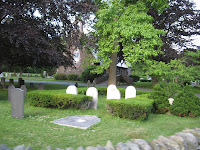 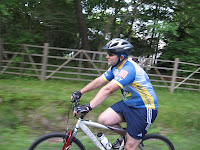 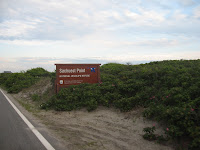 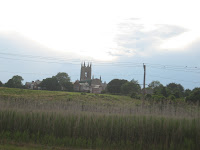 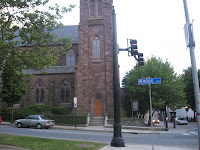 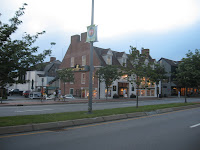 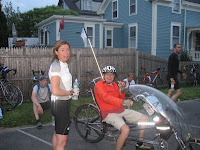 The sun began to set, there was pizza waiting, so it was time to leave. Throught the city streets back to 10 Speed Spoke bike shop to chow down, meet people and tell war stories. I met Steve and found out that he dropped out of the ride in the first mile. No wonder I couln't catch him. His friend Bill was still not back by 9PM, and I found out that he was on a search for a woman rider, lost with only her cell phone.

One hammerhead crash, resulting in a toasted wheel, a dented SUV and some scrapes. One near miss where a tandem couple who were so close to clamaty when a big tractor trailor rig, was actually touching the flapping shirt sleeve of one of them. Spooky story that was. Everything got worked out nicely though, which made for storytelling with smiles. 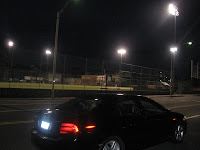 Darkness settled and I had a little more than a mile ride back to my car. The night riding on the quiet city street route was very nice ending to the evening.

Posted by amidnightrider at 5:15 AM