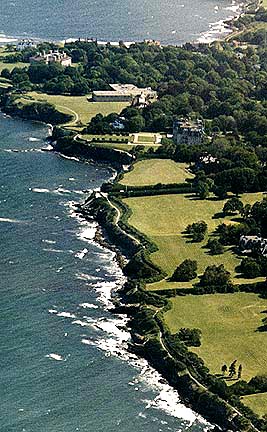 The longest day of the year ride in Newport R.I. is tonight after work. The two of us in my office will be cutting out early for the hours drive to Aquedneck Island and the 45 mile evening ride. Steve and I drove to NYC for the Five Boroughs ride in May. He is inviting a friend and the three of us will join a pretty large group for this annual event.

My youngest son lived in Newport for a couple of years and I learned of some convenient, "free" parking areas. I will be riding a little over a mile to the bike shop and have more beer money. I'll park right on First Beach by the way, and very close to Cliff Walk Todd was so close that he would walk to the beach with his surfboard. He lived in a mini-mansion and his rent was unbelievably cheap. The owner was an older very well off woman who rented two sections of the home mostly for security. Todd also swears he saw the ghost of the old captain a couple of time. *>( I wonder if he ever saw ailens?

Anyhow, Steve and I opted for the 25 mile loop, mostly to get back to the shop while the pizza was hot. Although I fear that some of the "hammerhead" doing the 46 mile loop may still get there ahead of us.

Newport is quite a town and the after ride festivities may add a lot of character to the ride.
Posted by amidnightrider at 8:20 AM