It's Tempting to Sleep In 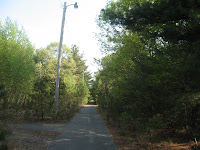 When the alarm goes off at 5AM, it's very tempting to roll over and sleep in for an extra hour. All it takes, usually, to overcome that is to sit up. The morning routine can be done by rote.

Rising early enough to lollygag a little really makes the early morning more bearable. One of the highlights is opening the front door to retrieve the newpaper. The serinade of the birds and critters is astounding, not so much that they are there, but by how loud and frenzied they are.

In Taunton, Ma the early morning commuters on bikes is can be counted on three fingers. Trying to catch a photo (candid) can be daunting. One rider never looks or acknowledges anyone. This mornings attempt at a photo just missed.

A second commuter was spotted at the half way point. 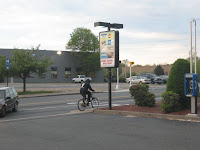 Others have been seen, but they get on the road later in the morning. The vocational school and middle school have a few, and there are a couple of retired gents on bikes.

Happy bike to work month to all. Charging $3.09 for unleaded regular today.

Posted by amidnightrider at 7:24 AM