Are You Ready For Some FOOTBALL!!!!!! 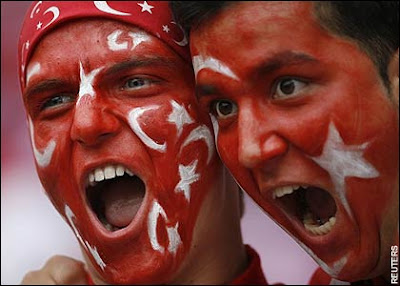 Holy smokes! After yesterday's absolute cracker of a match between Turkey and The Czech Republic, I’m left breathless. ESPN was so enamored that they replayed the match from the beginning straight away- an excellent programming choice, as it was the absolute perfect match for a neutral. Drama, heart, an incredible comeback, an insane last minute ending… I won’t go into it all, and won’t even mention the score- you just have to see it for yourself.
Here is a short highlight film 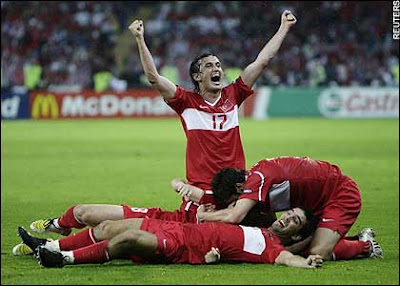 Holland is surprising the world with convincing routes of World Champion Italy 3-nil only to exceed that feat by defeating the number 2 team in the world France by an equally lopsided score of 4-1. Portugal the surprise leader of their group and Spain are two unlikely powerhouses.
Here are some more highlights

Lot of Americans have been programmed to hate soccer. Stay in our bubble and watch American football and baseball. Both are good, but it's sad that they are missing out on such excitement and ferver. There is nothing like it in any other sport and those of you who have attended your national teams matches, singing your anthems and waiving your flags know what I'm talking about. And it's also a good way to get to know the rest of the world.
Posted by amidnightrider at 8:19 AM