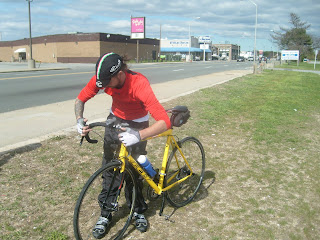 We were near the end of a 35 mile training ride.  We wanted to do a long ride with some good hills and decided on the back roads to Fall River, Ma.   First we had to ride the city streets of New Bedford, which at times can be very unfriendly to bikes and peds.  We did ok this time but I did mention to Brandon that he was really being annoying by riding all over the road.  I had to swerve and/or brake a few times to avoid hitting him as he cut in front.  He got mad and intentionally cut in front again. 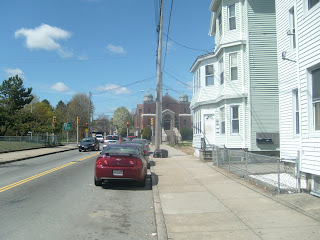 We were crossing the bridge over the Acushnet River and Brandon was riding without a care in the world.  The bridge had a cast iron railing that is not unlike a picket fence.  It has a 4" pipe on top of 2" iron pickets that are spaced a foot or so apart.  He was sliding his right hand along the top of the rail and leaned a little too much into the rail.  Overcompensating to the left and again to the right.   He looked like that bridge from the 1940 that was swaying and rolling like a wave.   His handlebars caught the pickets stopping his bike on a dime.   The back of the bike passed him and tried to throw him over the rail into the river.  Then the bike went down across the path.

I almost went for the brake but a quick decision told me to try to ride over his bike.  He said when he looked up, (being flat on his back), he saw me at the apex of a somersault going over my handlebars.  My front wheel  caught his dérailleur and stopped my bike throwing me over.  The next thing I remember was being flat on my back waiting for the pain.  It never came fortunately.  Both of us are bruised and sore, but neither of us are hurt.

When I got up, I noticed that there was a third rider approaching.  He stopped and just looked at us. Brandon said, "good thing you weren't closer or you would have been part of this".   He said "I just bought this bike at Yesteryear and paid a thousand dollars".   Then he rode off.    Ooooo Kay.  Whatever.

My bike is fine, Brandon's is a mess.   Both wheels are taco'd and his dérailleur is bent.  The fiver boroughs ride is in a week and a half and the scramble is on to get his biked fixed.

The first 32 miles were fun though.   We did get some hills and the 30 mph wind gusts gave us a workout. 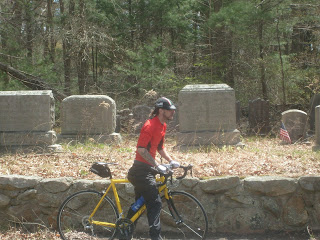 There was one section was the road was pretty washed out.   We also came across some really old cemeteries and has to stop and check out the dates.  Lunch was at this little place called Hixville General Store.  Nice. 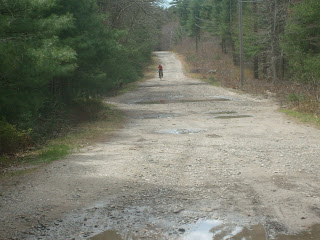 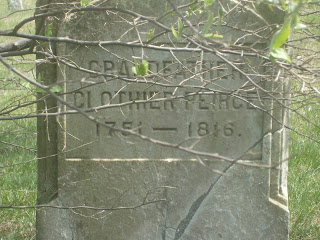 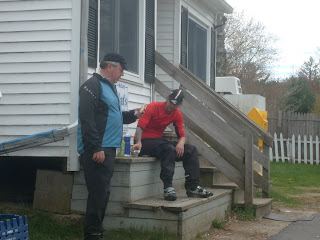 Posted by amidnightrider at 4:23 PM