Arriving at the kitchen at 6AM, wheeling the bike into the store room and all activity stopped. The stares of disbelief because I rode my bike today. It was 22F but with a 30 mph wind the chill brought it to single digits. The look on the faces when I began to disrobe and they saw the beads of perspiration.

Actually I didn't feel the cold at all, but the wind got me. It was like climbing a mountain. Because of the wind I was behind schedule. As I approached the swing bridge the traffic light turned yellow, then green again. A few seconds later, yellow, then red, then green. I figured out that the bridge tender was telling me to "chop chop" and get onto the span so he could close the gates to traffic. Once I passed the first barrier, the bell sounded, the gates closed and the process of opening the bridge began. It takes around three or four minutes for the span to drop six inches to allow the bridge to swing open. That gives me plenty of time to cross, hop over the gate and be on my way. I'll have to bring the guy a coffee or something tomorrow.

Wifey and my little Lucy made the cut in the Animal Shelter Calender. They are October gals. 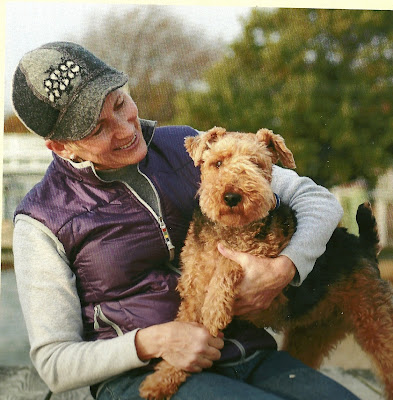 The reason dogs have so many friends is because they wag their tails, not their tongues.
Posted by amidnightrider at 10:03 AM