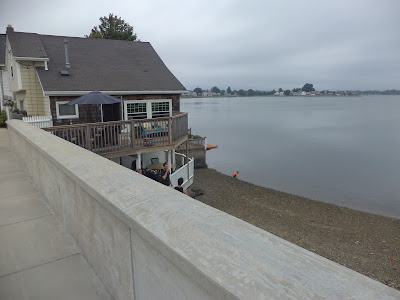 We had planned to begin our ride at around 9AM this Labor Day but at 8 is was raining pretty hard.  A check of the weather said the rain would cease till around three in the afternoon.  We decided to go against the norm and trust the weatherman's prediction.   A quick look at the radar online kind of makes that easy.

We drove to Island Park in Portsmouth R.I. to begin this ride on a very muggy overcast day.  The ride would take us over the newly completed bike lane crossing the Sakonnett River Bridge into Tiverton, R.I.  We had to ride a bit on Main Road which surprisingly had little traffic.  And after a short spin we were able to turn toward the Nannaquaket Pond area and ride the local back roads to Seapowet Creek, Nonquet Pond and Fogland.   Lots of old Indian names for sure and it the area of the

If your one who likes history, this is a great if not disturbing read. 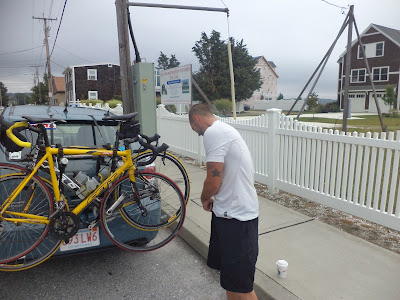 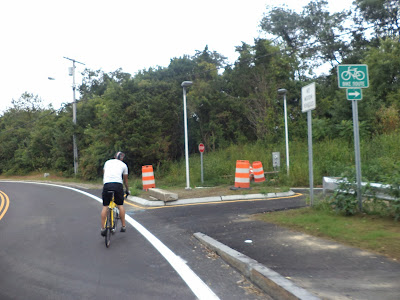 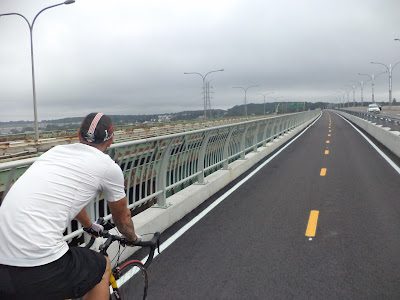 Riding across the new Sakonnett River bridge.  The old is just off to the left. 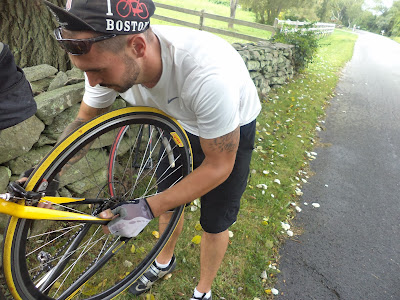 My newly installed brake pads weren't quite right.  My wrench got that straightened out. 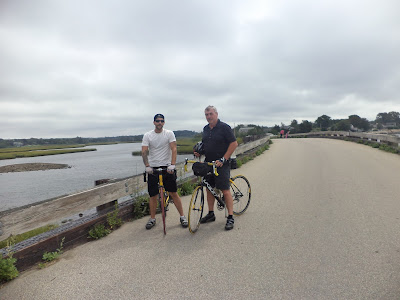 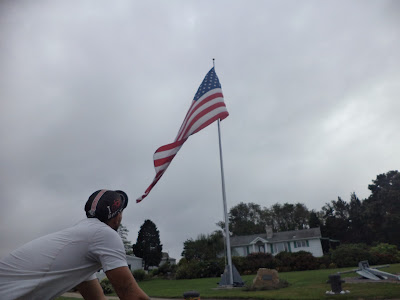 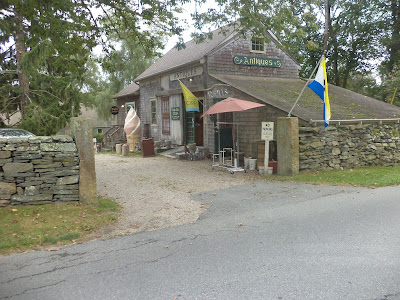 Our ride leader with the Newport Bike group pointed out this Trebuchet during our ride last week. It is rumored that the owner used this as a shortcut to get his 6 and 9 year old children to the river which is around 200 yards across the road over some trees.  Not only can you send your children to the beach but they have been used to launch pumpkins or a fiery piano. 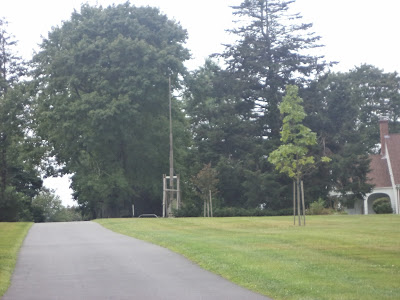 We ended our ride around 2ish, packed up the bikes and decided to stick around for lunch at Grazziano's.  We first noticed this place last week on the ride with the Newport Bike group.  The Cafe sits right on the waterfront and offers both indoor and patio dining. We chose an outdoor table and just as we sat down the claps of thunder began accompanied by a light rain.  We moved inside and within a few short minutes downpour began and we noticed that the weather channel was off by a mere 20 minutes when they called this.   We had been told that the food was good here but didn't realize how good.   My Italian sausage with onion and pepper was the best I had tasted.  During our lunch the owner sat down to talk with us and told how they were originally from Providence and always wanted to own a restaurant.  When this neat little waterfront spot came available they jumped at it.  They get most of their Italian meats and produce from the Federal Hill section of Providence which many swear is better than the North End of Boston for Italian cuisine.

Posted by amidnightrider at 2:22 PM