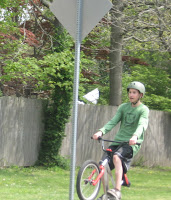 The club ride in the East Bay Bike Path was iffy. Staying local seemed the more prudent. With the camera of course. The first photos that struck were a couple of young riders doing tricks on the Phoenix trail in Farirhaven. After agreeing to being photographed, one went right into character, happly doing track stands and wheelies. His friend was a little uneasy so I cut it short. It would have been pretty neat to get more photos because both were pretty good tricksters. They need to get themselvs on "fixies", and have lots more fun LIKE THIS. Or THIS

They set the tone for the ride, and I began focusing on human powered transportation. Ironically, gas powered, were all stopped. In traffic jams no less.

The bridge crossing often offers photos that are unique to the are. Huge freighters in port, the fishing fleet, that is incomplete without and icehouse. And of course, traffic. 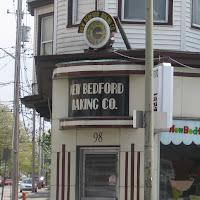 I found myself in the south end of New Bedford, Ma, in the Portuguese district at lunchtime. Fresh baked bread called, and I answered.

I expected to see lots of bikes, when I got to the Fort Taber/Clarks Point
section of the city. The youth baseball field was always a haven for bikes, now this 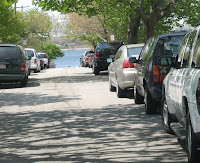 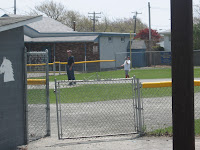 Not a bike in sight. But plenty of overweight kids.

The wind contributed to the lack of bikes and peds, for sure. The flags are flying on the southern tip of Clarks Point in New Bedford. On a clear day, Martha's Vinyard is visible from this spot. 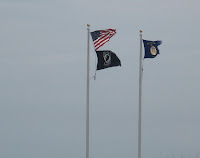 Here is the production.

Posted by amidnightrider at 12:41 PM