Festival, Factories and Other Stuff 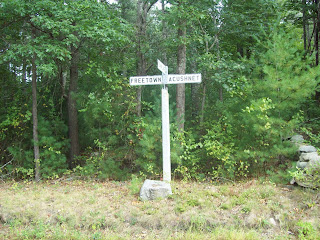 The town of Acushnet is celebrating it's annual Apple Peach festival this weekend.  It's a real old fashioned country affair where lots of people attend but nobody does anything.  Sit around waiting for the parade, then walk around the grounds and nearby flea markets and garage sales. Many of the items have been sold and resold at this event for years.

After breaking away from the festival area, things got really quiet on the roads.  Very little traffic allowed for meandering along the country roads which lead to lots of stops at newly discovered places. The head of the Acushnet River is a nice wildlife area that gradually winds it way to the factory areas before breaking out into the bay and finally the Atlantic.

The problems of the 20th century become evident as the river passes along the old factory areas.  New Bedford was twice the richest city in the country. During the Whaling era and again the Manufacturing era when cotton mills ruled.


Posted by amidnightrider at 12:53 PM