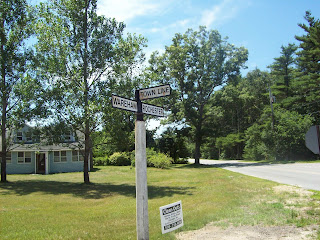 Seventeen miles of quiet country roads brought me to the Gateway to Cape Cod, Wareham. It's a quaint town located on the South Coast of Massachusetts that comes to life in the summertime. Everyone is outside, biking, walking, fishing and boating.
The ride to Wareham has some moderate rolling hills and a couple of tricky traffic areas to maneuver. Riding early afternoon on a weekday when the traffic is lighter is not a bad time.
Just before arriving at the town line I came across a herring run.  In the fall the fish return upstream using man made runs.  These were done when roads or other obstacles interfered with the runs.  Ecology was alive and well in the early 20th century around here.
I arrived in town sometime around 10 or 3 according to the Presbyterian church tower. The actual time was around 1:30, but I'm sure both those times on the church are correct twice every day.
That loop near the church was a new route for me.  In the past I had avoided the Bike Route signs which detour us around the center of town and in stead stayed on Main St.   Today Wareham was my turn around point which made my decision to go with the signs.   I was pleased when I ended up down by the bay and the boat yard and pleasure boat docks.
The lightship Nantucket was used by the coastguard mostly in the George"s Bank area of the Atlantic. A beacon of safety for the local fishermen and scallopers. The contraption used to lift boats out of the water was  invented by a local resident from Mattapoisett, MA.  It replace the old railroad style way of taking boats out of the water.  Then a wood cradle would slide into the water on rails, the boat would float onto the sunken cradle and a very heavy chain that was attached to the cradle would drag the boat ashore.  When the maintenance was complete the boat would slide back into the water and off she went.  The down side was that the shipyard could only work on one boat at at time.  Now the boat can be lifted and dropped onto a work area anywhere in the yard and many can be worked on simultaneously.
Although the waterfront is filled with working class men, they don't live there.  It's prime property and the homes and condo's go for top dollar.  Also the insurance for hurricane, flood and wind is astronomical if you buy it.  Many of the waterfront property owners have no need to buy insurance.  Any damage they take care of themselves. Pocket change for some.
The total ride was and easy 34 miles on a fantastic summer weekday.  Seventy degrees, sunny and a slight ocean breeze made this one of the better rides of the season.
Herring run in Rochester, Ma. 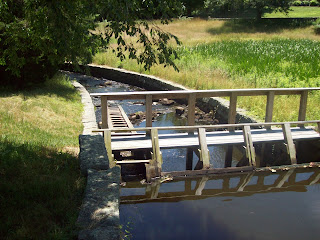 I arrived in Wareham sometime around 10 or was it 3? 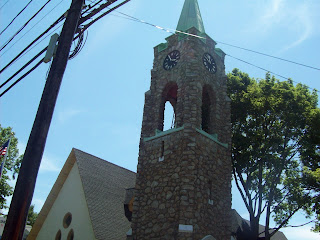 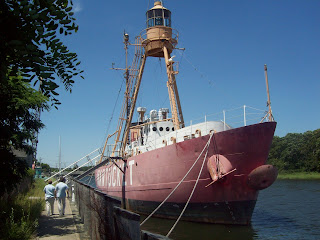 Little sailboats all in a row. How cute. 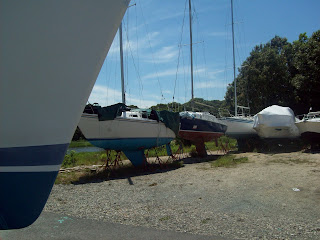 This lift replaced the system of rail, chains and pulleys to get boats ashore for maintenance. 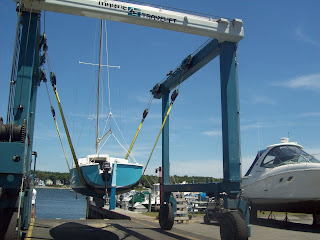 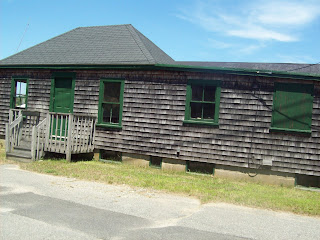 Yachting and condos.  A perfect match 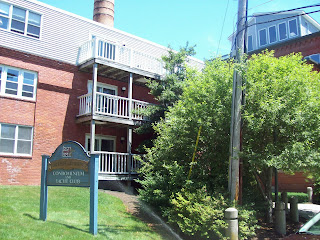 An old Duck Boat.  For moving troops over land and sea 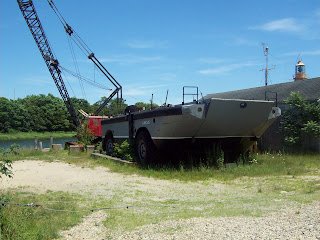 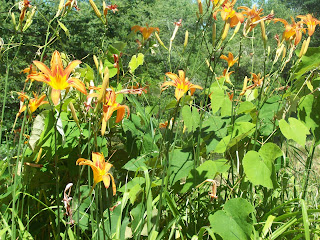 Upon arriving home I found a message on my  phone to fill in on a whale boat row.  Naturally I accepted and had quite a workout because of the wind and whitecaps in the harbor.  It was a hoot and some of the members are gearing up for the Whaleboat Races over the weekend.


Entering the harbor in 5 oar boat 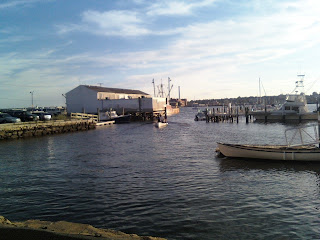 Boston Fire boat in for repair 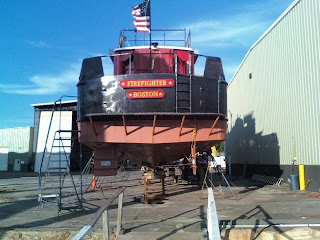 Posted by amidnightrider at 1:59 PM