A Long Walk On The Beach. 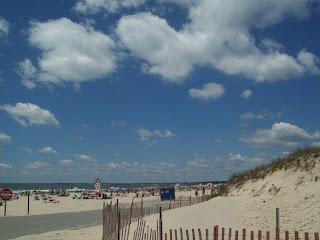 The humidity finally broke and the temperature topped off in the mid seventies.  It was a full day, beginning with Yoga in the park.  An hour of moderate stretching is a good way to start a beautiful summer day.  It was also the first day that it would be bearable to be out in the sun on the beach in weeks.  Horseneck Beach is the most popular in the area by far.  On Independence Day the line of cars was backed up well over a mile.  The lot holds thousands of cars and it was completely full.  It came to the point that the workers could only allow as many cars at a time as the number of cars leaving. It's $7/day to park or an annual pass is $35.  There is no charge for walkers or bicycles, only motor vehicles.

The state reservation is an oddly-shaped peninsula sticking out from Westport's mainland and mostly into Rhode Island Sound (southwest) and Buzzards Bay (southeast). The reservation contains about 600 acres (2.4 km2) (or 2 miles) of barrier beach, marshland, and a protected estuary habitat. Most of the marshland is concentrated at the northern portion of the peninsula bordering Horseneck Channel and The Let. The beach is located along the southern portion of the peninsula, bordering Rhode Island Sound and Buzzards Bay.

Gooseberry Neck is an offshoot peninsula of the parent Horseneck peninsula. It divides part of Rhode Island Sound from Buzzards Bay in the Atlantic Ocean.

Other than the usual activity of sun bathing and swimming, walking the length of the beach, (about a mile and a half one way), tops the list. Horseneck is also divided into social castes.  Social Groups have evolved and claimed the same areas of the beach for decades.  Some have just happened and other areas have been legally claimed.   The entrance closest to the amenities is the majority. Those who really don't fit into any social group. It consists of families, book readers, tourists and those who just want to claim a small area of sand and chill.  Generally it's the people that no one really notices.  They just kind of blend in to the background.     A few dozen yards toward the point are the jocks and students, both high school and university.  Lots of beach volleyball, soccer  and Frisbee games going on.  A buffer of a hundred fifty yards or so separate the latter from the gay section of the beach.  It's sparse on the weekday but weekend are party time in the gay area, and it's packed. The pun is unintentional but it is ironic.

Next is the private section called Baker's Beach Club.  Most of the tourists from the south, NY, NJ, Conn etc claim this section.  They have their own life guards, parking lots, restaurant and bathhouses. It's expensive to become a member and  OK, but seems kind of a waste when there is a free beach on either side.  Also, all beach front in Massachusetts is public to the high water mark.  That means anyone can walk your private beach below that line.  The last section, closest to the point, is the town beach. Residents of Westport can get a free parking pass for that lot which makes it the best deal.

The last half mile is pretty much deserted except for those "walking the beach".  Lots of piping plovers, tiny birds that are really a hoot to watch as they scamper back and forth trying to avoid getting their feet wet.  The little legs look like they are going a hundred miles and hour. 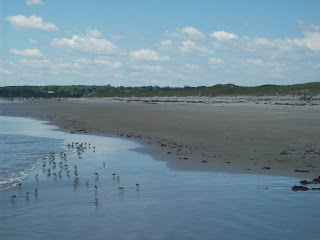 The end of the beach, "the channel" offers a spectacular view of "Westport Point" that is dominated by The Paquachuck Inn 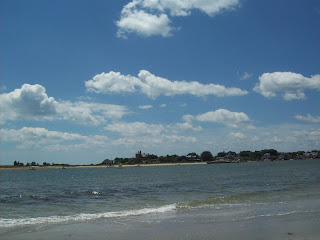 Taking long walks on the beach is really a wonderful way to spend a couple of hours on a mild summer's day.  It really is a good selling point on a dating resume. Especially on a beach like Horseneck.


It's a long way back 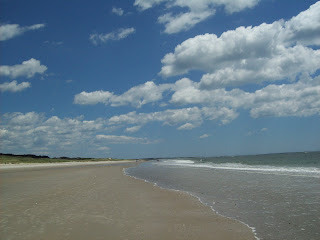 Your never really alone on the ocean front 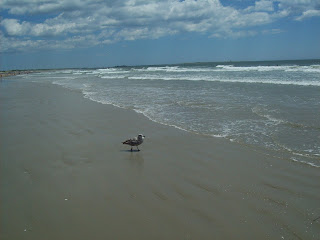 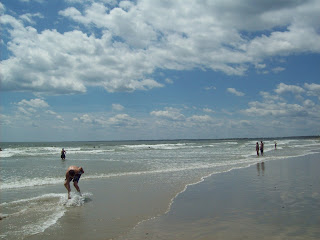 Mixing in with the majority 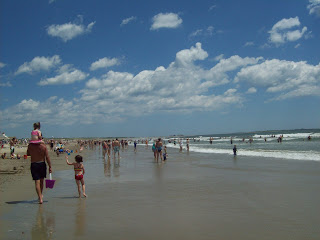 The Guards.  These kids are good at their job. 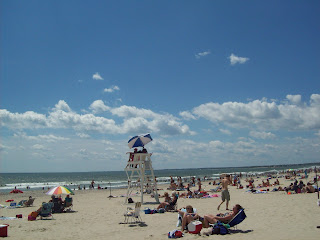 Posted by amidnightrider at 6:47 PM