I did a couple of rides with my neighbor Joey and he enjoyed them enough to talk about them with his family. His brother, Brandon asked, "Why don't we go sometime?". 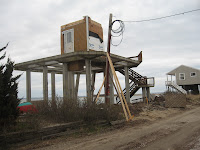 Sunday evening Brandon and I set out on a 20+ mile ride through Mattapoisett, Ma. 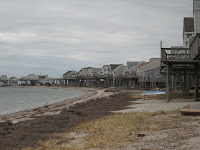 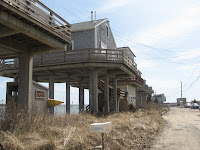 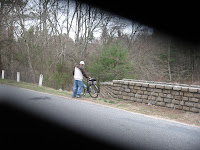 Brandon was a very good skateboarder in his younger days, and he could be seen on his BMX bike on any given day, doing tricks and stuff. Most often though, he was picking his bike of the ground and dusting himself off. While we were standing in front of my house deciding on a time to ride, a couple of younger neighbors stopped by to say hello. The talk somehow turned to music and a couple of tv shows that the younger ones didn't know of. Brandon said, "You never heard that/them?" One of the kids responded sarcastically, "What was that, like 1988, or something?" I'm sure it was the first time Brandon was called old.
<


I let Brandon ride my commuter bike, the Marin. This is the one with the brand new cassette and chain. Also a full maintanence was done in preparation for NYC this comming weekend. My goodness.....I have never heard so much banging, clanking and chain slips, like I did on this ride. 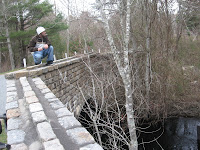 Most of the time he was lagging behind me. I say that with toung in cheek. He was behind but usually in the middle or on the opposite side of the road, one hand on the bar, and using the other for his cigarette.

Tonight I may ride with the Applichian Mountain Club group. Then again, I may stay home and see if the commuter needs any repairs.

***From the "someone finally looked under the rock", files

According to those early 21st century poets--Three-Six Mafia--it's supposedly "Hard Out Here For A Pimp".

I beg to differ with these latter-day Bards. Nowadays you see, it's actually much, much harder out here for a Wingnut. But just like in the movie "Hustle & Flow", the root cause of the trouble...

Is those pesky "Hos", of course

The Lower Manhattanite has quickly become my favorite blogger.

And this from Digby:

On September 11, 2001, Ashleigh Banfield was reporting from the streets of Manhattan, where she was nearly suffocated from the debris cloud from the collapsing World Trade Center. Banfield continued reporting, even as she rescued a NYPD officer, and with him, fled to safety into a streetside shop. After the initial reporting of the tragedy had ended, Banfield received a promotion, as MSNBC sent her around the world as the producer of a new program, A Region in Conflict.

more
Posted by amidnightrider at 9:00 PM