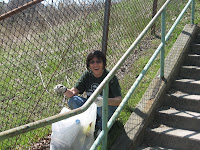 I did both but only used my camera for the bike ride.

A thirty mile ride brought me into New Bedford where I met a trio picking up trash around the bridge stairway. I struck up a conversation with Donna. She decided to quit smoking today when she saw the amount of butts that were disgarded at every stop light. She said she was going to visit Quit Smoking Journals where I am a moderator.

There were lots of people out cleaning their yards and cars. The parks were filled with little ones being watched over by parents and grandparents, baseball tryouts and practices and lots of soccer games.

Lunch was a $2 cold cheeseburger, and a luke warm bottle of water at the Dartmouth Youth Soccer complex and was enough fuel for the return ride. I did notice that Village Bike was gone. It lasted one year in Padanaram Villiage.

There was a guy riding an old Trek 520 touring bike. He doesn't tour, but said the bike was very comfortable. He does pretty much the same 17 mile loop every bike ride, and loves it. I was about to ask to take a photo of him and bike just as he bit adeu and left the bike path for his route. 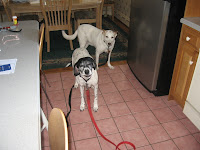 When I walked in the door, my two buddies were waiting patiently for their turn.

The remix covers it all.

Posted by amidnightrider at 3:54 PM