ESteve, who is riding the Five Borought next week and I did a training ride on the East Bay Bike Path. I ride it often and every ride exposes something new. 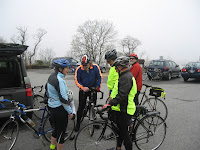 After three years of trying to meet up with the Narragansett Bay Wheelmen for the weekly "Cafe Ride", it finally happened. One rider broke the stem while putting air in her tire. A couple were worried it may be an omen. If you believe that stuff, I guess it could be. It wasn't. I wanted to give this groups shovels for something to lean on . 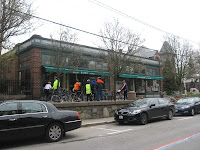 Off we went on the EBBP for a thirteen mile ride to the Bagle Shop in Bristol R.I.
The group began to pull away and I stayed with Steve. He took the winter off and I could see he was struggling. Not unusual at the beginning of any activity. 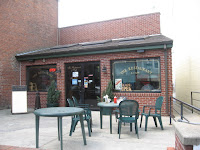 We decided to let the group go and we would have breakfast in Warren. "The Restaurant", is the preferred breakfast stop when I ride with my 20 something year old neighbor, Joey. The staff make breakfast a pleasure. (College age waitresses, if you know what I mean). Anyhow, back to the ride. Steve mentioned that he suffers from ashma, and when he said that I completely understood his slow start. Then he mentioned that he had two, "TWO" donuts on the drive to the parking area. Now I'm thinking, {{{{if I take a poll on what caused Steve's lethargy, would the votes lean towards asthma as the cause, or DONUTS!!!!!?}}}. (Bike Riding Donut Guy, you have an opinion on this?)

No matter. We had a nice ride that began on the cool side, with fog and a low cloud cover. An hour or so into the ride, it began to clear, and we got some sunny, rather warm conditions for the latter part of the ride. 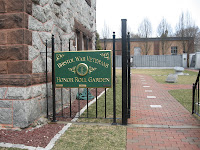 After breakfast, we decided on a couple of side trips. We stopped briefly at the Veterans Memorial in Bristol and also took a side trip through and around Colt State Park.

Here is the slideshow of our 32 mile ride, with some blues music.

Posted by amidnightrider at 5:06 PM